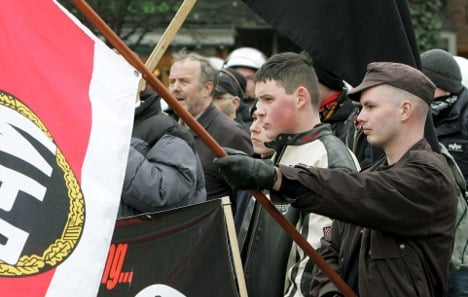 Exit Deutschland is an initiative that helps German neo-Nazis break out of extremist circles and build a new life. The process can take years, since far-right extremists are often caught in organizations and social circles that discourage contact with mainstream society. Simply walking away is often not an option for security reasons too, so Exit sometimes cooperates with the police to provide new identities.

Once a neo-Nazi has initiated contact with Exit, there usually follows an exchange of emails and phone calls which gradually develops into meetings and counselling, designed to help the extremists “overcome their worldview” and “work through their past,” as the Exit website puts it.

The Local spoke to one man who managed to make the break. The 30-year-old from eastern Germany, who now works as a counsellor and adviser for Exit, asked to remain anonymous to avoid reprisals from neo-Nazis.

How did you fall into the far-right scene?

I already came into contact with National Socialist ideology in my childhood. When I was 12 and 13 I got into the whole sub-culture – with music and football. When I turned 16 I discovered a passion for reading, which crystallized my thoughts into an ideology. By the time I was 16 or 17 I was a convinced National Socialist, and I stayed that way until I was 28, when I dropped out of the scene. I lived by and worked for the ideology that marked the whole community.

Why did you drop out?

One day I asked myself, “Who am I and what am I doing?” I was preaching freedom but I wasn’t free myself. The paradox preoccupied me so strongly I couldn’t stand it anymore. It came to a crisis and then a break.

What was your position in the neo-Nazi scene?

I was in two National-Socialist organizations. One I co-founded, which was banned in 2005. This was dedicated mainly to youth work. Recruiting young people – politicizing them, schooling them, binding them to the scene. The other organization, called Märkische Heimatschutz (Editor’s note: A far-right group in Brandenburg), was spread over several sections – it was an umbrella group for activists with about 50 or 60 members, plus the board.

What was your reaction to the revelations about far-right terrorist cells in Germany?

Bernd Wagner, director and founder of Exit, has been warning about far-right terrorism since the reunification of Germany. It was always relatively latent. Now unfortunately it’s happened, and it’s become public. Apparently people didn’t really listen. Nobody wanted a bad image of eastern Germany, or of Germany in general.

This development raises the question, “How is terrorism defined?” Does it start when you threaten families and people, or attack them physically? That’s a form of terrorism for me. The National Socialist ideology is pervaded by a terrorist spirit. It is a violent ideology – it denies other people their rights, it drives people out. Violence is a recognized instrument in the far-right scene – you are just meant to watch how, why and where you use it.

What was your experience of violence when you were a neo-Nazi?

Violence was completely normal for me as a Nazi. Even if I had personal doubts in some points, I still practised violence. That was part of my fanatical worldview. We were all like that. We saw violence as something to implement our political goals. People were constantly planning how they could get hold of chemicals, explosives and other devices. Pipe bombs were always being made. The threshold to violence, including terrorist violence, is very low.

Was there any organized training?

We practised martial arts on fields and in woods. There was tactical training too – how to break through police lines, how to pick anti-fascist protestors out of a demo and attack them. There are people who take it to a military level – getting Bundeswehr army training was encouraged. That couldn’t be displayed openly. People who boasted or gossiped about it were isolated and punished where possible. Some people went underground, but no-one fell out of the network.

What do you see as the main dangers of the neo-Nazi scene?

The danger of the far-right scene doesn’t just lie in the active members – statistics that the intelligence service reports. There are far-right sympathizers who work for leading telecom providers, in local authorities, or other socially respected positions. These people provide financial support, or access to customers’ data.

How is the neo-Nazi scene developing?

The image of the neo-Nazi with the skinhead and the Doc Martens isn’t real anymore. The scene has modernized, and has started to address issues that are especially interesting to young people – anti-capitalism, anti-globalization. At the same time, they are trying to attract the centre of society. On top of that, there is a strong radicalization in the National Democratic Party (NPD). It was used by us militant National Socialists as a strategic instrument and as a protective zone.