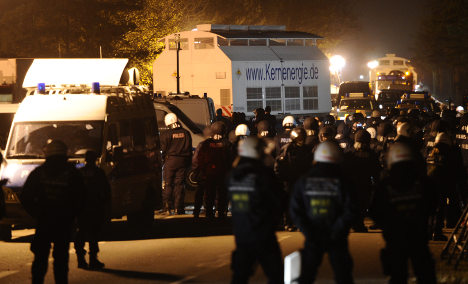 Trucks loaded with the waste rolled into a storage facility in the former salt mine at Gorleben in Lower Saxony after the final leg of a 1,200-kilometre (750-mile) journey that saw demonstrators trying to stop it all along the way.

“1,300 of the 1,800 at Gorleben cleared,” anti-nuclear group X-tausendmal quer wrote in a text message, describing the last pocket of resistance against police.

“Those who refuse to walk feeling pain,” it said, repeating a complaint of police roughness against demonstrators.

The convoy completed the last stage of its journey – around 20 kilometres by road – on Monday night, repeatedly stopped by demonstrators keen to prolong the delay. Last year it took 92 hours to reach Gorbeben, while this year the trip took 125 hours.

Both the police and protestors complained of rough treatment from the other side. Some protestors had thrown fireworks, bottles and wooden posts at officers using water cannon, truncheons and pepper spray.

Lower Saxony’s state Interior Minister Uwe Schünemann said police officers were attacked in a brutal fashion not previously encountered in such demonstrations. He said around 20 officers were so badly hurt they were off work.

Protestors however, complained that 355 of their number had been injured, mostly with pepper spray or having been hit with truncheons. Five had ended up in hospital, organizers said. A police spokesman admitted his officers had used techniques designed to inflict pain as they grabbed protestors to pull them away from the road.

Greenpeace used a van to drop a concrete block in the middle of a road. Two activists chained themselves to the block, which police had to hitch to a vehicle to drag out of the way. The trucks were further delayed by two protestors jumping on, in a desperate last-ditch attempt to delay them.

And while this, the 13th such transport of German waste from the La Hague reprocessing centre in France to the depot in Lower Saxony was the last, anti-nuclear demonstrators vowed they were not finished. They say Gorleben is an unsuitable place for storing such dangerous waste. Official reports over the years have mentioned leaks and structural instability.

The next shipment of nuclear waste is expected in 2014 – not from France but the British reprocessing centre in Sellafield.