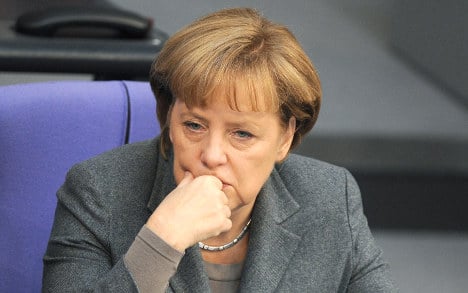 Speaking at a regular government news conference, Chancellor Angela Merkel’s spokesman said, “Germany has solidarity with its European partners and has already deployed enormous resources. But we also have debt to deal with.

“We are on a good path to doing this… but we too do not have unlimited financial resources,” added the spokesman, Steffen Seibert.

There have been appeals from around the world for Germany to either contribute more generously to the eurozone rescue fund or to backtrack on its opposition to pooling debt within the 17 countries with the common currency.

Berlin is also blocking what many see as potentially the most powerful solution to the eurozone crisis: allowing the European Central Bank to intervene more forcefully on the bond markets to bring down member states’ borrowing costs.

Germany is “sceptical about the several calls for Europe to deploy the last big financial reserves, what in the Anglo-Saxon world is known as the bazooka,” said Seibert.

“We in Europe can’t pretend we have financial means that we don’t really have… we are strong in Europe. Germany is strong, but we are not strong to an unlimited degree. That is true also for the federal republic,” he added.

There was “no other solution than the one the federal government is arguing for,” said the spokesman.

He insisted the countries of the eurozone must concentrate on reducing their debt piles, cutting spending in their budgets and boosting the competitiveness of their economies.

He also reiterated Berlin’s denial of an earlier press report that Germany was open to pooling the sovereign debt of the six countries with a top AAA credit rating.

“Not the least of our problems in Europe, are the constant rumours” about possible solutions to the crisis, he said.

Merkel is planning to give a speech in parliament on Friday to set out Germany’s position on the crisis ahead of a summit of European Union leaders in Brussels on December 8 and 9.

Germany is making major efforts to bring down its budget deficit but is still grappling with a debt of more than 80 percent of its gross domestic product.