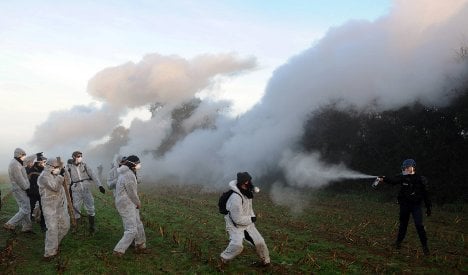 A mobile police canteen was set on fire by demonstrators and at least three people were hurt, two protesters and a riot officer.

Spooked by Japan’s Fukushima disaster, Germany has decided to phase out its use of nuclear power, and thus bring to an end the controversial practice of sending radioactive waste overland to France for reprocessing.

Anti-nuclear activists want France to follow suit and shut its reactors, an idea firmly dismissed by President Nicolas Sarkozy, and fierce protests were expected along the 700 kilometre route to Germany.

The shipment was to leave a railway yard in the town of Valognes in Normandy, northwest France, as police played cat and mouse with hundreds of activists, firing teargas and making at least five arrests.

As dense fog rolled in off the English Channel, mingling with the gas, police set up roadblocks to prevent demonstrators converging on nuclear giant Areva’s yard. A helicopter flew overhead and riot vans lined the roads.

Cows scattered in the fields as police charged groups of stone-throwing protesters, and a few kilometres outside Valognes a group briefly blocked a section of track with rocks and metal debris. Protesters smashed press cameras.

“Beyond the danger that this waste poses, we’re demonstrating our radical opposition to a means of production that means we’ll always need more power. We’re against endless growth,” said 24-year-old Anna, from Paris.

There has long been widespread public opposition in Germany to nuclear power, which environmentalists believe presents an unacceptable radioactive threat to public health and the environment.

In March, the Japanese nuclear plant at Fukushima Daiichi was hit by an earthquake and a tsunami, triggering a meltdown and massive radiation leak – and increasing worldwide concerns over nuclear power.

Chancellor Angela Merkel’s German government buckled under political pressure and agreed to halt its reactors by 2022, forcing energy suppliers to close profitable plants and levying a tax on the reactor’s fuel.

In the meantime, Germany will no longer send nuclear waste for reprocessing in France, but will instead stockpile it until a way is found to make it safe.

Fukushima also increased concerns in France, but opposition to nuclear power has never been so strong here, where Sarkozy’s government has vowed to stand by the industry, despite attacks by Greens.

An industry group, Uniden, which represents Areva and big energy users such as car and petrochemical plants, warned that giving up nuclear power would directly cost France 150,000 jobs and threaten two million more.

France produces a higher proportion of its power in reactors than any other country in the world, and its electricity bills are around 25 percent cheaper than in its neighbours, a boon to industry.

Nathalie Kosciusko-Morizet, Sarkozy’s minister for transport and the environment, expressed astonishment that anyone would protest the shipment.

“The system is that we are sent waste, we treat it and send it back. This is waste we’re sending abroad. Do they want us to keep it?” she demanded in an interview on Europe 1 radio.

According to pressure group Greenpeace, the shipment of 11 containers holds the same quantity of “highly radioactive” waste as the last one to leave the French reprocessing plant at La Hague for the German site at Gorleben.

Last November the train took 91 hours to arrive at its final destination – an entire day longer than planned – and it was dogged the length of the route by French and then German protesters.

Around 50,000 activists turned out in Germany to try to disrupt the train during the last such shipment one year ago, and organisers expect around 20,000 to demonstrate against the convoy this week.

Demonstrators are angry that Merkel’s announced nuclear phase-out will take another decade, and that there is still no permanent storage site for the waste generated in the country’s reactors.

“The ‘nuclear exit’ is nothing of the sort for most people,” said Jochen Stay of the German anti-nuclear pressure group Ausgestrahlt. “For us, this falls very short.”

The Gorleben facility, on the former border between East and West Germany, is only a temporary dump and Germany’s powerful state governments have mobilised to fight a relocation to their regions.