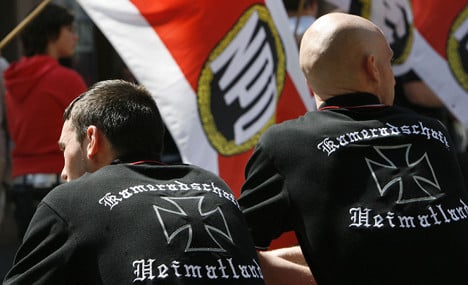 The report by public broadcaster ARD’s show Report Mainz on Tuesday night revealed that there was clear evidence of ties between the extremist party and groups like the Sturm 34 neo-Nazi organisation, which was banned in 2007. More than a quarter of its so-called “hard core” members were also part of the NPD, the television network reported, citing court records and other research.

Other extremist organisations like the Skinheads Sächsische Schweiz were created directly by NPD members. And at least seven of 12 NPD board members had also part of an extremist group called the Thüringer Heimatschutz in 2000, ARD said.

It’s still not clear what if any ties the NPD had to the so-called National Socialist Underground (NSU) group, which has been called responsible for the murder of at least 10 people, including one policewoman and nine people of immigrant background between 2000 and 2006. The neo-Nazi terror gang is thought to have had ties to Thüringer Heimatschutz.

But already, strong calls have emerged across the country for a new try at formally banning the NPD. The government tried to ban the organisation in 2001 but Germany’s Constitutional Court ruled that paid government informants had been too enmeshed in the party’s affairs.

The revelations surrounding the NPD came as new details emerged in the investigation into the NSU killings. Police said Tuesday that one of the suspects in the NSU killings, Uwe Mundlos, had likely shot accomplice Uwe Böhnhardt dead before setting fire to the mobile home both of them were in and then shooting himself to death two weeks ago.

That incident set off a chain of events that resulted in police tying together the murders, which they previously believed had been somehow connected to organised crime. Police are currently investigating 12 people who the think were connected to the NSU. Four are being investigated on concrete criminal charges.

Meanwhile, officials said a large sum of cash totalling more than €27,000 had been found in the home and bank safety deposit box of one of the suspected NSU accomplices. Police said they were trying to identify its origin.

They also said they believed the family of the slain police officer had somehow been connected to Böhnhardt und Mundlos and speculated the two had killed the officer after believing she had recognised them.

All five political factions in the Bundestag expressed their solidarity with the victims of the slayings and Interior Minister Hans-Peter Friedrich said a working group had been formed to investigate the possibility of an NPD ban.