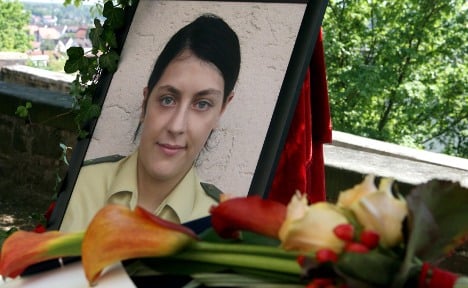 Federal police president Jörg Ziercke said late on Monday that Kiesewetter’s step-father wanted to rent the pub “Zur Bergbahn” in Oberweißbach in the eastern German state of Thuringia, but was beaten to it by a man with far-right affiliations, who police now want to talk to in connection with the murder.

The locale was a meeting point for the neo-Nazi scene, Ziercke explained, and Kiesewetter herself lived opposite the place from 2001 to 2003. The pub also employed a cook in 2007 with the same surname as Beate Zschäpe, one of the three members of the NSU responsible for a series of murders of immigrants from 2000 to 2006.

Police are now investigating the potential connections that led to the murder of Kiesewetter in the western German town of Heilbronn in 2007. The 22-year-old policewoman was shot in the head and instantly killed in April that year as she was sitting in her patrol car. Her colleague was badly injured and was in a coma for weeks, unable to help much with the investigation after he recovered. Their service weapons were stolen from the scene.

It is thought that Uwe Böhnhardt und Uwe Mundlos, the two NSU members found dead two weeks ago, were responsible for the murder. According to a report in news magazine Der Spiegel, police are now speculating that the pair killed Kiesewetter because they thought that she had recognized them in a chance meeting.

The police are currently investigating 12 people who they believe were members or supporters of the NSU, including Mundlos, Böhnhardt and Zschäpe. Of the nine not yet dead or in police custody, four are being investigated on suspicion of concrete crimes.

These nine people apparently abetted the core trio by helping them escape, providing them with documents, or renting them property. One is thought to have given them access to his or her bank account, while another helped them make a bizarre Pink Panther DVD boasting of their crimes.

Ziercke said police have now found 20 guns belonging to the trio, 11 of them in a burned out flat in the eastern town of Zwickau that the three shared.

Elsewhere, several German states have rejected a proposal from parliamentary committee chairman Wolfgang Bosbach to merge some of the regional Verfassungsschutz offices, following their failure to stop a neo-Nazi murder spree.

Hannelore Kraft, state premier of North Rhine-Westphalia, told Tuesday’s Ruhr Nachrichten newspaper that she didn’t think a fusion of forces would improve the efficiency of investigations. But she acknowledged that all German states should reassess the structures of their respective secret services.

Bosbach, chairman of Germany’s parliamentary committee on interior affairs and a member of Chancellor Angela Merkel’s ruling conservative Christian Democratic Union (CDU), suggested on Monday that some of the smaller domestic intelligence offices should merge.

His idea comes as the German government tries to find out why the country’s intelligence network failed to pick up a far-right terrorist cell responsible for a string of murders and bank robberies spanning several years.

Party loyalty apparently counted for little among the state governments in the debate. Uwe Schünemann, CDU interior minister of Lower Saxony, told the Hamburger Abendblatt newspaper that reducing the number of offices to three or four large authorities was not a good idea. “These mammoth authorities cannot be controlled,” he warned.

His counterpart in Schleswig-Holstein Klaus Schlie, also of the CDU, agreed. “So-called mammoth authorities offer no guarantee that information won’t get lost,” he told the same paper. He said that even if there were only one central intelligence authority, it would still need regional offices.

The Verfassungsschutz is currently divided into 16 state offices plus an overarching federal authority.