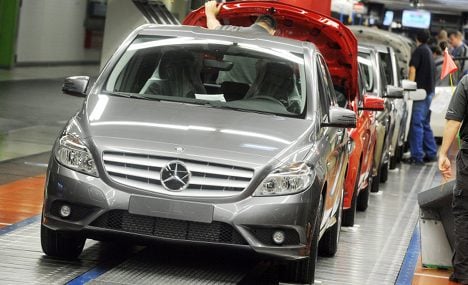 According to the Associated Press, the unnamed 46-year-old manager was only able to present a German identity card when pulled over by Tuscaloosa police last Wednesday. He was subsequently arrested and charged with not having proper identification as required by Alabama’s new immigration law, which has been criticised as being excessively draconian.

Eventually, a colleague was able to find the man’s passport, visa and drivers licence at his hotel and took it to police, who subsequently released the Daimler executive, the Associated Press reported.

Mercedes-Benz’s headquarters in Germany confirmed the arrest to The Local, but declined to comment further, directing all questions to its US subsidiary, which was not available on Monday morning.

“We heard that he didn’t have a drivers licence but we don’t have any more information right now,” a spokeswoman told The Local.

The incident even apparently drew in Alabama’s governor, who called the authorities to determine what had happened, although his office denied he had exerted any pressure on police.

The executive was caught up in the controversy surrounding an Alabama law passed in June, which is widely considered to be the strictest in America. Most of the law, which requires police to verify someone’s immigration status if officers have a “reasonable suspicion” he or she could be in the United States illegally, has been upheld by courts so far, despite challenges by civil liberties advocates.

Mercedes-Benz has built cars at a plant near Tuscaloosa since 1993 and in 2000 invested $600 million (€445 million) in an expansion of the facility. According to the company, the plant provides more than 22,000 jobs and is Alabama’s largest exporter, sending $1 billion (€743 million) in exports throughout the world.