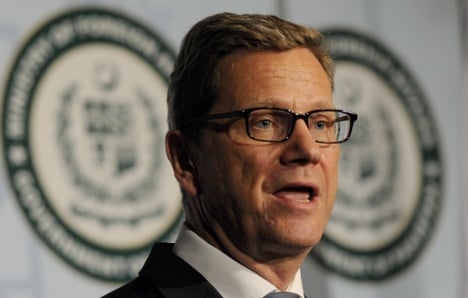 “The two ministers expressed deep concern for the escalation of violence in Syria” and reiterated their support for an Arab League roadmap for peace in the country, they said in a joint statement.

Westerwelle and Terzi di Sant’Agata were also worried “over the news from Egypt concerning violent clashes between the population and security forces,” it said. “They appealed to all sides to immediately refrain from any further acts of violence.”

On Libya, the ministers said they hoped that “a new and inclusive transitional government will be formed soon” leading to “future free and fair elections.”

They welcomed the arrest on Saturday of Moammar Qaddafi’s eldest son Saif al-Islam, all the while calling for him to be guaranteed a fair trial “in accordance with international standards.”

Addressing problems closer to home, the two urged the strengthening of the eurozone and endorsed “necessary limited changes to the EU Treaty” to achieve it.

Westerwelle said he was “confident” that Mario Monti’s new government would be able to implement measures to ensure Italy’s economy does not become the latest victim of the spreading crisis.

Iran’s nuclear programme also came up for discussion, with both ministers concerned at “recent developments” in the programme revealed by a recent report from the International Atomic Energy Agency.

“There is an urgent need to increase the international pressure on Iran – including sanctions – aimed at changing Tehran’s behaviour and fostering its honesty and transparent cooperation with the international community,” the statement said.