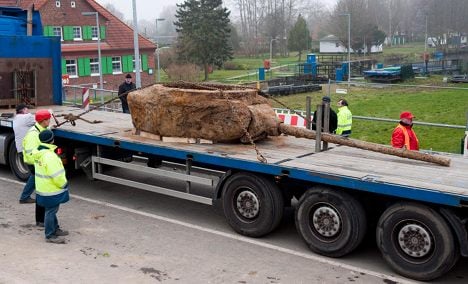 Authorities at the German War Graves Commission will now attempt to figure out whether the remains are German or Russian, or if they belong to more than one person. They will likely eventually be buried in a city war cemetery.

Inside the rusted tank, a bomb disposal team identified shells, hand grenades and rifle ammunition, said Fred Tribanek, a team member. Tribanek said the ammo was live but would not be dangerous if it remained within the tank.

The tank is thought to have come under attack during the Soviet invasion of Rostock in May 1945.

“Despite the area’s fraught history, we’ve never found anything like this before,” said Tribanek. “Large World War II bombs certainly, but never a whole tank.”

The rusted tank’s remains were loaded onto a truck on Thursday and stored at a depot, where they will undergo careful examination. Eventually authorities hope to find the other half of the tank.