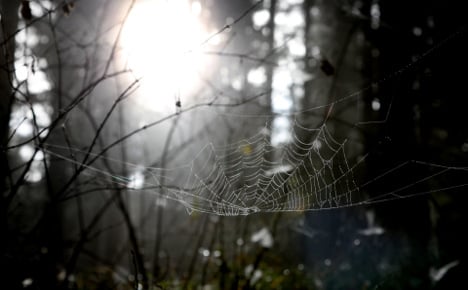 In some areas, however, temperatures will climb to as high as 12 degrees Celsius. Sadly this will not continue, as next week will see the beginnings of frost underfoot.

“The fact of the matter is that Germany is currently avoiding the troughs of low pressure across Europe at the moment, which means the country is mostly staying dry,” DWD meteorologist Stefan Külzer said in a statement.

Parts of the country will be clear Thursday night, while others will remain under a blanket of stubborn cloud and fog. Late into the night particularly thick clouds will gather over the West, bringing with them a chance of rain or drizzle.

Despite being murky, heavy cloud cover should bring nighttime temperatures of six degrees, while in the east it will be a shivery three degrees below zero.

On Friday, the western part of Germany will still be cloudy with some rainfall. Southern and eastern regions will also experience fog, but this will be burnt off by the autumn sun towards the afternoon.

So for those keen to catch some rays, head to the foothills of the Alps or higher areas in the south, where there will be the greatest chance of sunshine.

Highs in cloudy areas will barely climb above two degrees. Otherwise temperatures will range from between four and six degrees, even reaching 12 degrees in regions lucky enough to experience sunny spells.

During the night on Friday, the northern half of the country will remain covered in clouds, especially in the lowlands, where a small amount of rain has also been predicted. The southern half will be mostly clear with fog drifting around in places. In the mountains, temperatures will rest around three below zero,

Saturday will see more of the same late autumn weather. In the north and east it will be cloudy but there shouldn’t be any rain. Sunshine and fog will continue to fight over control of the south.

Temperatures will range from four degrees to ten degrees, but perpetually foggy areas will stay under five degrees, with a slightly stronger wind bringing even more of a chill.

By Saturday night, however, persistent cloud clover will have eased, with the whole country being clear with patches of fog. Twinkling night skies will not be without their drawbacks through, with temperatures dropping to lows of four below zero in the southeast.

The whole country will be dry on Sunday, but in the few remaining foggy areas, temperatures will barely break the zero degree mark.

Sunday night will mark the start of frosty mornings, as widespread temperatures of minus four may see pavements begin to ice over.