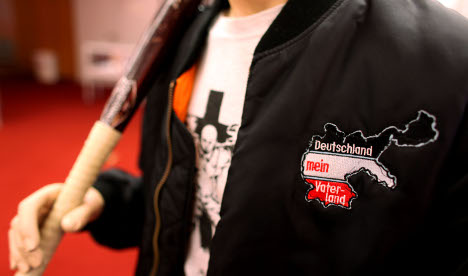 Investigators on Wednesday said they had found a list of 88 potential targets compiled by the so-called National Socialist Underground (NSU) group including several German politicians and representatives from Turkish and Muslim groups, according to the Süddeutsche Zeitung.

“I was completely shocked at first and I still feel rather uneasy,” said Green parliamentarian Jerzy Montag, who told the paper’s website that he was on the list.

The number 88 is used as code in the neo-Nazi scene for “Heil Hitler” since H is the eight letter of the alphabet.

After blistering criticism of gross errors in the decade-long investigation into a string of nine xenophobic murders, Friedrich said that domestic intelligence bureaus and police on the federal and state level should be required to compile relevant data.

The aim would be to identify links between crimes and the possible development of criminal networks.

And while authorities were still trying to piece together how the neo-Nazi gang could operate unhindered for so long, the government has begun to worry about the damage done to Germany’s reputation abroad.

Following revelations over the weekend that a trio of far-right extremists had killed at least nine shopkeepers with immigrant roots, German Chancellor Angela Merkel was quick to express her “shame” and sympathies to the victims’ families.

But an apparent lack of wider solidarity with Germany’s minority communities has begun to preoccupy the government and opposition politicians, who fear Germans are being portrayed in the foreign press as being indifferent and largely unmoved by the slow-motion neo-Nazi killing spree.

The far-right group calling itself the National Socialist Underground (NSU) claims to have executed at least eight people of Turkish heritage and one Greek across Germany between 2000 and 2006. Dubbed the “Döner Murders” because two of the victims worked at döner kebab shops, the German police failed to make a connection to the neo-Nazi scene.

Kenan Kolat, the chairman of a leading Turkish community group in Germany, told the Frankfurter Rundschau daily on Tuesday that he was dismayed over how little Germans seemed to care about the killings.

“Where’s the reaction from the trade unions and churches? Only the Central Jewish Council has stood by us, for which I am grateful,” Kolat told the paper. “I expect a reaction from the civil society – that has to happen by itself and not just for us Turks but society at large.”

Aware that Germany could ill afford to be seen abroad as being lenient towards neo-Nazi violence, German Foreign Minister Guido Westerwelle on Tuesday met the Turkish ambassador and representatives of the German Turkish community.

But comments he made while attending an EU summit in Brussels on Monday evening appeared to confirm that he was more concerned about Germany’s image than the xenophobic slayings themselves.

“That’s not only horrible for the victims, that’s not only bad for country, it is above all also very, very bad for the reputation of our country in the rest of the world,” Westerwelle said at an EU summit on Monday evening, according to the website of Der Spiegel.

And a suggestion for a more public recognition of the unprecedented wave of neo-Nazi terrorism came first not from the government, but the opposition.

Thomas Oppermann, a leading member of the centre-left Social Democrats in parliament, said he would push for central memorial service for all the victims of the NSU – the nine immigrant shopkeepers and one policewoman.

Late Wednesday, German President Christian Wulff announced he would meet with the families of the murder victims at his official residence in Berlin in the presence of high-ranking members of the government and parliament.

He said tolerance in Germany had to be defended against “those stirring fears against foreigners and the foreign. We must all act to thwart each attack,” he said in a statement.

“Has our country been fair to the victims and their survivors? Shouldn’t we have suspected a right-wing extremist background and have we watched the far-right scene enough? Did we possibly allow ourselves to be misguided by prejudices?”