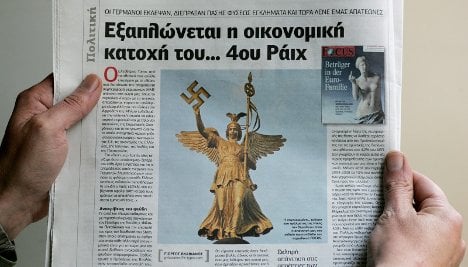 “These caricatures make me so angry. And what is so serious is that the politicians join in,” said Edit Engelmann, a fifty-something from Kassel in central Germany who has lived in Athens for the last decade.

Engelmann was so incensed by the portrayal of Greece in the German press that she wrote a book to explain the reality of Greek life – insisting it is not all Retsina and relaxation.

Like many Germans living here, she tells AFP of her unease and anger at seeing Greeks treated as lazy cheats in certain German papers.

The xenophobia reached a peak ahead of the first bailout of Athens by the EU and the International Monetary Fund (IMF) in May 2010, which was followed by another set of loans this year as Greece struggled to pay its bills.

The German magazine Focus ran a picture of the Venus de Milo, one of the most famous works of ancient Greek sculpture, brandishing her middle finger on its front page in March 2010.

At the same time, a number of German lawmakers suggested Greece sell some of its famed islands to pay off debts, while a popular ditty repeated in the mass-selling Bild tabloid suggested it add the Acropolis to the fire sale.

“I think that the Germans, who because of their history don’t attach great importance to national symbols, don’t realise what this means to the Greeks,” said Ulrike Drissner, director of languages at the Goethe Institute in Athens.

These include “that a teacher in Greece can earn barely €800 (a month), that buying food costs far more than in Germany, and that in some buildings, including mine, the heating has still not been turned on to save money”, she said.

The book is already having an impact. At the Frankfurt book fair last month, Engelmann said she faced “very aggressive” questions about Greece, but also surprise from compatriots who were previously ignorant about what she described.

“It is only in the last few weeks that serious articles about Greece have appeared in the German press,” said Drissner of the Goethe Institute.

The negative stereotypes are not confined to the German side, however. In Greek newspapers, the image of the Nazi ordering the Hellenic people about is everywhere, while during protests and in the political graffiti daubing on the walls of Athens, anti-German slogans and Hitler moustaches abound.

Both parties have historical grievances to bring to the argument, from the Bavarian prince who ruled Greece in the 19th century and established Athens as the modern capital, to the fraught question of World War II reparations.

Greece was occupied by Germany during World War II and claims it lost out in negotiations for compensation for damages after the peace was agreed.

However, ordinary Germans living in Greece say these issues rarely come up in their day-to-day lives. “I never see this animosity in my daily relations with the Greeks,” said Diana, a German woman married to a Greek who has lived here for 25 years.

Ute Petkike, who has lived in Greece for more than 30 years, agreed, telling AFP: “We don’t argue, we have animated discussions and the same question returns again and again: why don’t the Germans want to help us?”

Diana, who did not want to give her family name, said she saw herself as a mediator who tried “to explain Greece to Germans, and Germany to Greeks.”

This was in fact what the Goethe Institute was set up to do, although these days it no longer flies the German flag outside, just in case.