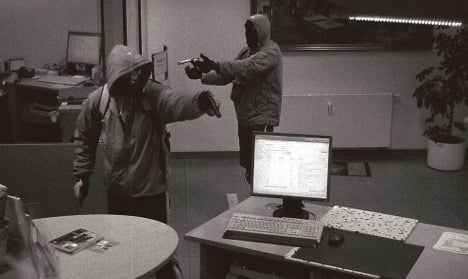 According to information obtained by the Neue Rhur/Neue Rhein Zeitung, the crimes now being looked into include a nail bomb attack on a Cologne street predominantly inhabited by Turkish people in 2004 and an attack on a group of Russian Jewish immigrants at a Düsseldorf train station in 2000.

German investigators have already linked the policewoman’s 2007 slaying as well as a series of previously unsolved killings of nine foreign-born food vendors and shop-owners, nicknamed the “döner murders,” to the suspected neo-Nazi terrorist cell.

On Friday, federal prosecutors took over the investigation that was launched after two men killed themselves following a botched bank robbery in the city of Eisenach. Investigators searching their flat in Zwickau, Saxony found the guns used in the series of killings.

Police have identified the two men as Uwe B. and Uwe M. and have arrested a third suspect, a woman identified as Beate Z. She now faces charges of murder, attempted murder, and belonging to a terrorist organization.

All three came from the eastern German city of Jena and were known to be active in the Thüringer Heimatschutz , a far-right group, since the early 1990s.

The website of Der Spiegel magazine reported that the three were among a group of neo-Nazis suspected of sending letter bombs in 1997. Then in 1998, after investigators found five pipe bombs and explosives in a garage belonging to Beate Z., she and the two men disappeared.

At the time the head of the Thüringer Heimatschutz was actually an informer for Thuringia’s domestic intelligence agency, the Office for the Protection of the Constitution. The agency has denied that there was any contact between the state authorities and the suspects.

Thomas Sippel, current president of the Thuringia Office for the Protection of the Constitution, told Focus magazine that shortly after taking office in 2000, he launched an investigation into whether the trio had ever worked as informants for the agency. He said there was no proof found of any such contacts.

Monika Lazar, parliamentary spokeswoman on right-wing extremism for the Greens, said the question now was why these alleged criminals had remained undetected for so many years. “One wonders, what are the investigative authorities doing and what are undercover intelligence agents for?” she asked.