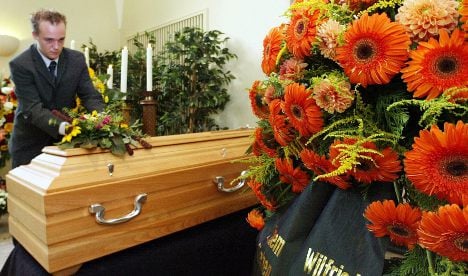 The head of the Federal Association of German Undertakers (BDB), Rolf Lichtner, has warned the public to be cautious about the real costs of seemingly cheap funerals.

Speaking ahead of Remembrance Sunday, Lichtner told the DAPD news agency that the price originally quoted often does not include costs such as transport, storage or cremation. Once these are added an offer of, say, €999 can quickly turn into €2,500 bill.

These dubious undertakers are those that use “aggressive advertising” which only focuses on price, he advised. Lichtner pointed out that those mourning their loved ones have little ability to spot these kinds of underhand methods. “They don’t always inform themselves about the services and are left at a disadvantage.” This is being exploited by the cut-price undertakers, he argued.

The website bestattungen.de lists 520 undertakers who offer funerals for less than €1,200. The BDB says that an average funeral, however, costs €3,000. That does not include cemetery fees.

Lichtner criticized the fact that cemetery costs have risen sharply. “In the last 20 years they have doubled,” he said. This is prompting people to look for alternatives, such as spreading ashes, or burial at sea. He added that those living close to Germany’s borders are even contemplating burial in neighbouring countries.