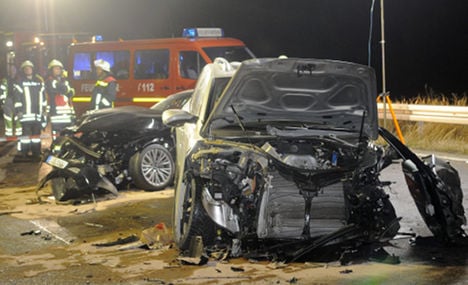 According to the Wiesbadener Kurier, 48-year-old Marco M. won a €514,242 jackpot while playing bingo slots at Wiesbaden’s casino early Saturday morning and was so happy that he gave huge tips to workers and €20,000 to another casino punter.

But just 19 hours later he drove down the nearby A3 motorway north of Wiesbaden and swerved through three lanes of traffic in an apparent attempt to turn around before he smashed his car into oncoming traffic, the newspaper reported.

According to the Bild newspaper, a 56-year-old man was killed in the crash and his wife and 17-year-old son severely injured. Four other people were also hurt in an ensuring series of crashes.

Marco M. then freed himself from the wreckage and ran away. He later travelled to Frankfurt where he turned himself in to police. He is now being investigated on possible homicide charges, police said.

The Wiesbadener Kurier reported that Marco M. had been seen drinking wine earlier in the evening. But a blood alcohol test on Sunday turned up no alcohol in his system and police are investigating whether he may have been diabetic and failed to take his medicine, the newspaper wrote.