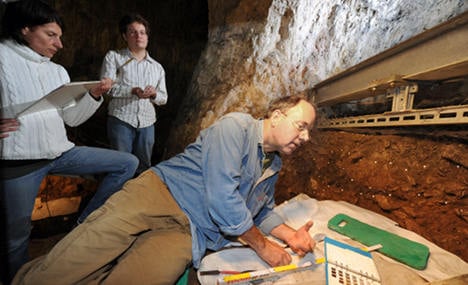 They found four painted stones from the cave Hohle Fels near Schelklingen, although the meaning of the red-brown spots is still a mystery.

The stone paintings, thought to be 15,000 years old, are being displayed at a special exhibition at the University of Tübingen’s museum.

The spots don’t seem particularly artistic at first glance. But they are important because they represent the first time such old paintings have been found in Central Europe, although similar work has been seen in France and Spain.

The stones at Hohe Fels appear to have been painted with a mixture of red chalk and lime, with water from the cave, said excavation technician Maria Malina.

“These spots are anything but accidental,” said archaeologist Nicholas Conard who assisted on the find. “It is quite clear that they have relevant content.”

What it all really means remains unclear. There is speculation the spots could refer to shamanism or be a menstrual calendar of sorts.

Hohle Fels has been a magnet for archaeologists in recent years after researchers working there found a Venus figure and flutes thought to be 40,000 years old.