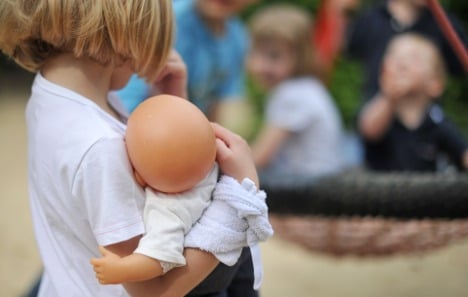 The Süddeutsche Zeitung reported on Monday that the federal government promised the states an extra €4 billion over the six-year period to provide extra places, to meet a target of 35 percent, but the current figures from the states’ various statistics offices suggest that the increase in the number of kindergarten places has actually slowed down since 2007.

German Family Minister Kristina Schröder is growing impatient. “I don’t understand the states,” she told news magazine Der Spiegel. “The federal money is there, and time is running out.”

The government even estimates that some German states need to reach 37 percent to meet demand, as many municipalities fear more and more parents will need kindergarten places in the coming years.

Germany’s most populous state North Rhine-Westphalia has the lowest proportion of day care places. According to the state’s statistics office, only 15.9 percent of one-to-three-year-olds in NRW had access to a place in March 2011, an increase of 1.9 percent on the year before. If that rate continues, the state will not reach even 20 percent by 2013.

The smaller state of Rhineland-Palatinate, meanwhile, has managed to increase its percentage from 20 to 25 percent in the same 12-month period. The other western German states of Bavaria, Baden-Württemberg, Hesse, Lower Saxony and Schleswig-Holstein, are all struggling with percentages of around 20 percent. The problem is not nearly as acute in the formerly communist eastern German states.

The federal statistics office is set to publish its own figures on Tuesday.

Thomas Rauschenbach, director of the German Youth Institute (DJI), which carries out studies into family issues, told the Süddeutsche Zeitung newspaper, “If these figures are confirmed, the targets that were set with a big fanfare five years ago will be missed by a long way.”

The growth rate is unlikely to be boosted by the German government’s decision on Sunday to go ahead with a new childcare benefit for those who keep their children at home until the age of three – known as Betreuungsgeld.