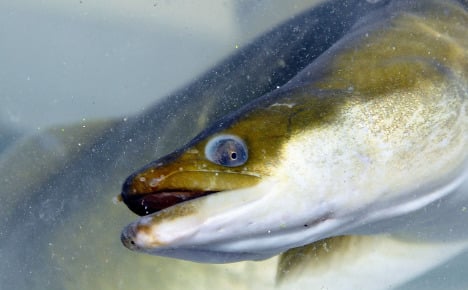 The project is part of a wider European effort to raise rapidly declining numbers of a fish suffering the effects of overfishing, pollution and disease.

In 1999, the International Council for the Exploration of the Sea (ICES) confirmed that the number of European eels had dropped below sustainable limits. But it wasn’t until 2007 that the European Commission acknowledged the necessity for a Europe-wide effort to raise eel stocks. By this point, the number of eels had slumped by almost 90 percent.

By 2008 each European Union state had compiled their own action plan to save one of the Europe’s stranger fish.

The agriculture and fisheries research institute (LFA) in the state of Mecklenburg-Western Pomerania also took up this challenge, drawing up a project which they hope will shed some light on a journey that is hundreds of millions of years old – the migration of the European eel to the Atlantic Ocean.

The long term aim of their €700,000 eel-tagging plan is to gain a deeper understanding of this mysterious creature in the hope of creating a long-term action plan to increase their presence in Europe’s waters.

LFA scientist Claus Ubl is one of the driving forces behind the unusual project, and has been scouring the rivers Warnow and Peene for eels to implant with tracking devices since the beginning of summer. Both the rivers flow into the Baltic Sea, from where the eels travel out to the ocean.

“Eels really are a special kind of fish,” Ubl told the Local. “A lot remains unknown about them, so they’re especially interesting to work with.”

Along with his team, Ubl has implanted 100 devices in adult eels so far this year, and he plans on implanting a further 50.

During the procedure, Ubl plunges an adult eel, measuring up to 1.2 metres in length, into clove oil – a natural painkiller. When he feels the fish is suitably numb, he opens the animal’s abdominal cavity, making sure not to damage any of its organs with his scalpel. Ubl then inserts a two-centimetre metal transmitter into the opening and closes the animal up with three neat stitches.

The eel is transferred to a tank of clean water to gain consciousness. After two days the stitches are inspected and if the fish is healthy, it is returned to the river.

The metal device now tucked in the eel’s abdomen will emit a click every three minutes for the next 18 months. These clicks will be received by one of the five underwater receivers in the Warnow, allowing scientists to locate the position of the eels as they leave the rivers of northern Europe and head out to sea.

“Through locating the eels we hope to understand more about the speed and distance they travel,” Ubl said.

It is known that the eels swim thousands of kilometres to the Sargasso Sea, believed to be their spawning ground. Lying east of Florida, this large area of the central North Atlantic is dense in seaweed that provides shelter for the eels.

After laying millions of eggs in the depths of the Sargasso, the female eels die. The eggs, however, are carried by currents all the way back to Europe. En route, they hatch into tiny transparent “glass eels.”

Only 15 percent of the baby eels make it to the river to mature into adulthood. Those who do succeed will typically live in Europe’s rivers for up to 20 years until they reach sexual maturity.

But because of factors such as increased pollution, over-fishing, disease and a boom in the number of cormorants – a sea bird with a taste for the slippery creature – the number of eels making the pilgrimage to their spawning ground is declining rapidly. Conservationists believe they could become extinct unless protective measures prove effective.

In 2010, environmental group Greenpeace put the European eel on its “red list,” a list of fish sold in supermarkets that have a high probability of coming from unsustainable sources. Despite this, eel meat remains a delicacy for many Germans and is widely available across the country.

There are measures in place to try to halt the decline, as Ubl explains. “Trawler nets have already been banned for fishermen in Mecklenburg-Western Pomerania, and the minimum size for a caught eel has been raised from 45cm to 50cm, giving them more of a chance to mature before being caught,” he said.

“But because of a complicated life-cycle, a short term fix isn’t possible as we simply do not understand the eel well enough yet,” he added. “Many scientists even believe that it could take between 40 to 200 years to achieve an increase in their numbers.”