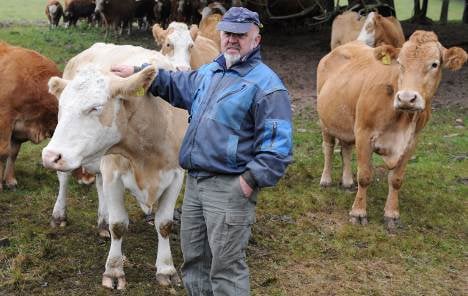 Farmer Oswald Büttner insists his cows are clean and refuses to pay the prohibitive costs of about €16,000. His farm is in Kleinkahl, Bavaria, only 15 kilometres away from his grazing land in Hesse, where bovine herpes tests are less stringent.

Büttner has been keeping his cattle over the border from May to November for the past 20 years, but new health regulations introduced last year by the Veterinary Office in Aschaffenburg, Bavaria, mean that this year the cows can’t come home without a blood test. “It’s a fool’s act. They talk about opening the borders and then they bring in borders for cows,” Büttner told the Süddeutsche Zeitung newspaper.

The cows were last tested in their cosy Bavarian barn on April 18, and were found to be herpes-free. “The certificate is valid for 12 months, and is only rendered void if my cows have contact with other cattle,” Büttner told the newspaper. “But they were totally isolated. And the nearest farm to my Hesse field is also completely BHV-1 free.”

Büttner says the tests would set him back €16,100, including the cost of rounding up all the animals. “I don’t think they know in Aschaffenburg how hard it is to catch a calf,” the farmer commented.

Bavaria has invested a lot of money in wiping BHV-1 out from within its borders, and has taken pride in its pioneering role in Germany. Austria and Switzerland are already free of the virus, but as Büttner points out, the situation is complicated in Germany because there is a general policy of free trade and movement between states.

“Vets from Hesse also travel to Bavaria, and slaughterhouse transports take cows in Hesse before picking up others in Bavaria,” he said. “The virus is just as likely to be contracted those ways.”

Büttner has offered to keep his cows isolated in Bavaria until next year, and not to sell any until after the next scheduled blood test in April, but to no avail.

He also doesn’t think BHV-1 is particularly dangerous anyway. “I’ve had animals that carried this virus in the past. That was in 1995,” he told the newspaper. “We just vaccinated the herd and the strain died out.”

The farmer says if he is not allowed to bring his cows home, he will have to slaughter all 69 animals, putting himself out of business.