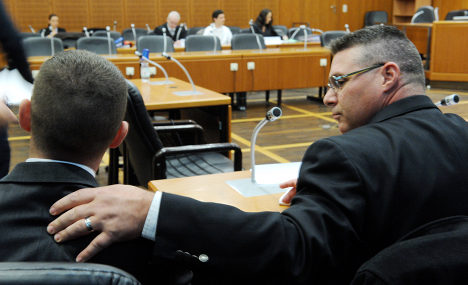 The statement came during Uka’s trial on Monday for the March attack which has been called the first ever jihadist attack on German soil.

Staff Sgt. Trevor Brewer, 23, said Uka pointed the gun directly in his face and pulled the trigger twice as he shouted “God is Great” in Arabic – but the gun jammed and failed to fire.

“When I looked up, the pistol was in my face. I heard the words ‘Allahu Akbar’ and the pistol went ‘click,'” Brewer told the court, according to AP news agency.

“I saw hate, loathing and hate in his eyes,” said Brewer. He thought he was going to die, he added, saying that the attack had left him with severe psychological problems which took months of counselling to overcome.

Uka is accused of storming a bus carrying the unarmed US Airforce personnel, killing two soldiers, injuring two more and continuing to try to shoot further soldiers before his gun jammed and he fled towards the airport terminal where he was arrested.

When Uka then fled the bus and ran off, the airman gave chase, until Uka reached the terminal building and was arrested by police.

Brewer said, “I couldn’t carry a weapon any more and that is one of my main tasks,” the airman told the court. But he told of surviving comrades who had fared worse.

One of the injured personnel, shot in the head and buttocks, could no longer serve in the military and that “was his goal in life,” Brewer testified.

Another airman who was hit in the jaw, elbow and abdomen can stay in the military but “he is recovering very, very slowly,” he said.

“We expect, of course, that we may lose our lives in war,” said Brewer. “We expect such a thing but not here in Europe or in the USA.”

The US Air Force personnel on the bus were all out of uniform and unarmed and headed for the Ramstein airbase with their weapons locked in boxes during the shooting.

Uka has confessed to the shooting, saying he had been influenced by Islamist propaganda.

Prosecutors, who believe Uka acted alone, say they said they found more than 1,500 files of religious content on his laptop and MP3 player, many of which were jihadist.

Some were texts by Pierre Vogel, who is a German Islamic preacher accused of fomenting hatred.