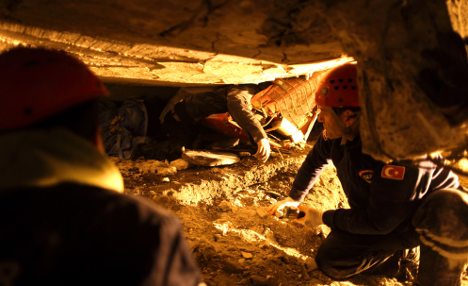 Merkel sent Turkish Prime Minister Recep Tayyip Erdogan a telegram saying she was shocked at the earthquake which cost so many people their lives. “I would like to convey our sympathy to you and the people in the region concerned. Our thoughts are with you.”

Westerwelle echoed the sentiment and offered more concrete help to the Turkish government in dealing with the aftermath of the quake which hit the far eastern region of the country with a force of 7.2 on the Richter scale.

More than 200 bodies had been found by the end of Sunday, with many more still missing. The Turkish authorities have warned to expect around 1,000 deaths.

Erdogan promised to leave no-one out in the cold, while the increasingly frantic search for survivors trapped under rubble continued into the night. Army units have been deployed to the region while at least two provisional tent hospitals have been set up.

In the city of Van around 200 prisoners escaped from a jail after a wall was destroyed in the quake – although around 50 of them have since reportedly returned having assured themselves that their families were safe, according to a report in Monday’s Die Welt newspaper.