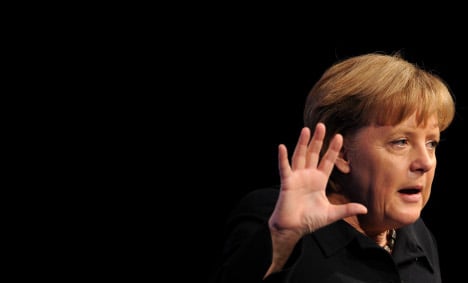 “We are preparing the decisions for Wednesday,” Merkel said, referring to another round of EU talks announced just days ago.

“The focus is on technical discussions that are very complicated,” she added. “To keep expectations in line: Decisions aren’t expected today.”

The German chancellor did, however, express confidence that European leaders would be able to reach a consensus by the end of next week’s summit.

“I think that finance ministers have made progress and that we will be able to reach our ambitious goals by Wednesday,” she said. Merkel also said she believed eurozone states would “supply the necessary funding for Greece.”

The latest report by the troika – the European Central Bank, International Monetary Fund and European Commission, which are overseeing the bailout of debt-ridden Greece – said Athens could face shortfalls of €252 billion through 2020.

Germany’s chancellor also echoed calls made by Foreign Minister Guido Westerwelle that the EU court should play a role in making sure that eurozone nations stick to deficit guidelines.

“It has to be possible to bring a country before the European Court of Justice if it does not meet the requirements of the Stability and Growth Pact,” she said, in comments made Saturday in Braunschweig.

Merkel and her French counterpart, President Nicolas Sarkozy, met ahead of Sunday’s summit in Brussels, amid reports of ongoing disagreement between Berlin and Paris over how to tackle the eurozone’s spiraling debt crisis.