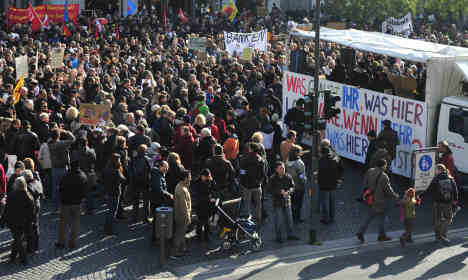 The demonstrations have been inspired by the “Occupy Wall Street” movement in New York. Its message has been echoed by protesters in cities around the world.

Police said about 2,500 people rallied in the centre of Germany’s financial capital, Frankfurt. The protest was organised by the “Occupy Frankfurt” movement, as well as the Attac network, which supports “democratic alternatives in the globalization process,” according to its website.

Last Saturday, roughly double that number took to the streets of the city.

The crowds marched from Rathenauplatz square in the city centre to hold a rally at a protest camp in front of the European Central Bank in Frankfurt.

In Berlin, too, hundreds of people gathered for the second Saturday in a row, but the turnout was much smaller than last weekend’s demonstration.

Organisers had announced a march from Alexanderplatz square to the Brandenburg Gate, where only about 200 participants showed up. A week ago, organisers said some 10,000 people took part in the protest.

Despite the lower turnout, there was still a large police presence in central Berlin on Saturday, with a wide area around the parliamentary building closed off.