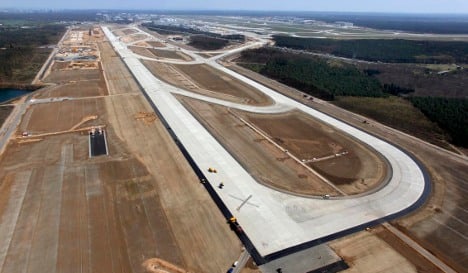 The planning and construction took 14 years, and was prompted by a 1997 call by the then chair of Lufthansa’s board, Jürgen Weber, for an expansion of the airport.

“If the infrastructure is not further developed, the airport will one day no longer be the economic motor of the region,” he said, according to a report in Friday’s Frankfurt Allgemeine Zeitung.

It is hoped the fourth runway will keep Frankfurt as a major international hub along with London’s Heathrow and Dubai – even though it is too short for a Boeing 747 or Airbus 380 to land on.

Ground was broken for the new runway in May 2009, the start of a huge undertaking which cost €1.5 billion, while a further €670 million was spent on moving a chemicals factory to a nearby industrial park.

An additional €160 million was spent on compensatory environmental measures, including reforestation of 282 hectares in the region – the area which had to be chopped down for the runway.

Airport operator Fraport said it had paid for 11,372 frogs and toads, 805 lizards as well as rare grasshoppers to be collected from the runway area and moved elsewhere before construction began. A total of 2.5 million cubic metres of soil was moved and two runway bridges built over the A3 autobahn.

The airport registered around 53 million passengers last year, getting on or off the more than 464,000 arriving and departing planes.

This year the number of passengers is set to increase by seven percent, while the annual figure is expected to reach more than 88 million in nine years. A third terminal is already being planned, to deal with around 25 million passengers a year on its own.