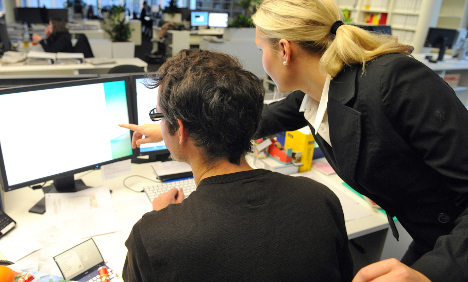 Currently, just 3.2 percent of the most prestigious positions at Germany’s 200 biggest companies are held by women, according to the German Institute for Economic Research.

Launching the initiative which they called “unique in Europe,” the companies said they would fix realistic objectives, specific to each company and would assess their progress annually.

They also emphasised the voluntary nature of the plan.”For these companies, voluntary participation is the sustainable and justified route, which renders a fixed rule via legislation superfluous,” the companies said in a written statement.

Although big-hitters in the German economy undertook efforts to increase female representation 10 years ago, little has changed.

Figures put forward Monday by the 30 DAX companies were more favourable, as they took into account all executive posts and not just the very highest levels of management.

They showed that the proportion of women in leading positions currently is 28 percent at Adidas, eight percent at steelmaker ThyssenKrupp and 28.7 percent at Henkel, producer of household products and cosmetics.

Automobile maker Volkswagen, the only company to distinguish three hierarchical management levels, acknowledged it had just 3.7 percent of women in its most prestigious posts.

But, in future, the aim will be to have 20 percent of women in management positions by 2020 at Daimler carmakers, compared to 11.9 percent today, or 14 percent by the end of 2014 at energy giant EON compared to its current level of 12 percent.

The German government, headed by Chancellor Angela Merkel, named the world’s most powerful woman by Forbes magazine, is split over the introduction of compulsory quotas for women in the boardroom.

Von der Leyen accused companies of not comparing apples and oranges in their defining of management positions.

“I am waiting for clear responses concerning women on the board of directors and supervisory boards, where the money and power are,” she told a news conference.

In Germany, the board of directors consists of a company’s executive officials, while the supervisory board is made up of shareholders’ and employees’ representatives.

“I reject the principle of a mandatory quota,” Schröder said. A single quota would penalise heavy industry in particular, which is dominated by men at all hierarchical levels.

Regine Stachelhaus, director of personnel at EON, and one of the rare women in the board room of a DAX company said: “A mandatory quota is superfluous.”

However, she added this depended on strong government support for child care and the promotion of sciences being taught from primary school.

A survey of female executives and employees published Monday by polling institute Forsa; showed 55 percent were in favour of compulsory quotas.