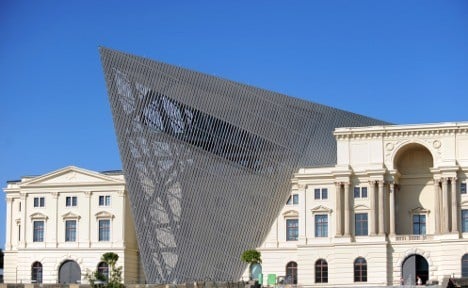 Opening to the public on Saturday after seven years of renovation, the museum aims to tackle the delicate relationship between the German people and their often bloody military history.

Five storeys high, a viewing platform in the 14,700-ton wedge offers visitors a stunning panorama of Dresden’s skyline as well as a solemn reminder of the city’s history. The peak points toward the Ostragehege section of the Elbe River Valley, where heavy Allied bombing in February 1945 caused extensive damage to the city – the angle of destruction spreading through the old town in a shape now mirrored by the museum.

Click here for a gallery of the new museum

“The contribution (of the building’s redesign) is to come into the present, but the link to the city is also re-established,” said Joachim Klein, Libeskind’s European representative, ahead of the museum’s official opening on Friday.

The building has housed military museums since 1972 – first for the communist East German army, and, after the reunification, the Bundeswehr. But Libeskind’s design has transformed the museum from the inside out.

In contrast to the original colonnaded floors, the addition’s architecture is unmistakeably Libeskind: from the vertical vitrines – unexpected empty shafts similar to the voids the architect used in Berlin’s Jewish Museum – to the juxtaposition of the inner wedge’s sharp angles with the wide corridors of the historic building.

The constant contrast between old and new was exactly the point, according to Klein, “a visual sign of the renovation.“

Overlapping the original building, the v-shaped wedge is also practical for the museum’s interior makeover.

The 10,000 square metres of permanent exhibition combine a chronological retelling of Germany’s sombre military history from the primitive weapons of the 14th century, through two world wars, to its current unpopular mission in Afghanistan.

Within the Libeskind addition, 11 topic-specific sections orient visitors on the impact of violence – “a very, very central topic and a question that is reflected in all parts of the chronology,“ said Museum Director Matthias Rogg.

Designed as an area for reflection, the wedge exhibits handle the areas of “war and memory,“ “politics and violence,“ “military and fashion,“ “war and play,“ “military and language,“ “formation of the body,“ “animals in the military,“ “suffering in war,“ “military and technology“ and “protection and destruction.“

Exhibits often encompass broad topics, then provide opportunity for focus and reflection on the information.

Through exhibit components such as parliamentary voting cards belonging to German Chancellor Angela Merkel and her predecessor Gerhard Schröder, as well as items used by the modern-day Bundeswehr in Afghanistan, the museum seeks to highlight current events relating to the military.

And an exhibit portraying propaganda prevalent when the Bundeswehr first introduced mandatory military service has come full circle in light of the July decision to abolish conscription this year.

Major Lars Berg, a museum spokesman, said he likes what the renovation has provided: “It’s an interesting combination of conventional components and something very progressive that one wouldn’t expect from the military.“

As a visitor, Berg said he experiences a change of perspective – and, for the soldiers, a reflection of their reality, generally removed from mainstream society.

But whether the museum, attempting to cover seven centuries of national military history, has somehow undermined episodes, such as the Holocaust, is something visitors will have to decide themselves, according to Berg.

Connecting operations history with the history of the Holocaust as well as questioning the centrality of violence are bold moves for a military museum, according to Rogg.

“The museum sees itself as a platform – it’s not just a display window but a platform for critical discussion,“ Berg said.

The official re-opening of the Military History Museum will take place Friday, October 14, with planned appearances from Libeskind and the German Defence Minister Thomas de Maizière.

On Saturday, the museum will open to the public, with multiple events planned in the first few weeks. Entrance to the museum is free through the end of the year.