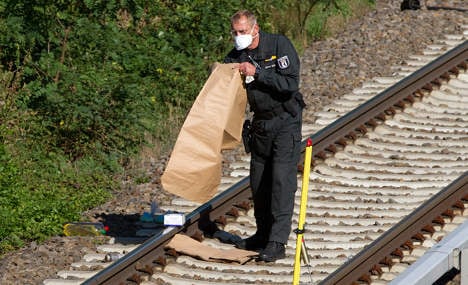 Germany’s federal prosecutors’ office told The Local that police have found at least 17 incendiary devices, most simply bottles filled with petrol, at nine crime scenes in rail facilities in Berlin and Brandenburg since Monday.

That includes at least one device found near the city’s Südkreuz station at about 10:30 am Thursday morning.

Top federal law enforcement officials were handling matters due to the “special importance of the case,” according to the prosecutors.

But Ehrhart Körting, Berlin’s interior minister, said the public need not fear a new wave of leftist terrorism seen in West Germany in the 1970s. He told the BZ newspaper that the extremists suspected of attacking the network espoused a fringe philosophy supported by very few Germans.

They’re “not very organized, but a small leftist group,” Körting said. Although he called them “knowledgeable” about where to strike to create maximum angst, he played down the risk they posed.

The attacks began Monday with an arson strike that damaged signalling on high-speed tracks between Berlin and Hamburg. That meant trains had to be rerouted, resulting in delays and cancellations for thousands of passengers.

Incendiary devices were later found near the capital’s main train station and in west and southeast Berlin, among other locations.

A group calling itself the Hekla reception committee has taken responsibility, saying it wants to protest German involvement in Afghanistan as well as the jailing of American soldier Bradley Manning, who accused of leaking documents to the Wikileaks website.

In an internet statement Thursday attributed to the group, members denied they were terrorists or trying to hurt people.

“The firebombs are incendiary devices placed solely with the aim to interrupt signal and data communications,” the group wrote.

Like Körting, Dieter Wiefelspütz, the parliamentary interior expert with the centre-left Social Democratic Party (SPD) played down the leftist threat, pointing out to Der Spiegel magazine that so far the attackers have merely interfered with the rail network but not practised “indiscriminate killing.”

However, federal Transport Peter Ramsauer told Der Spiegel of his concern that the attacks represented a “new dimension” of “criminal, terrorist attacks.”

And Hans-Peter Friedrich, Germany’s interior minister, warned in Focus magazine of a potential “spiral of violence.”

Gerd T. Becht, of Deutsche Bahn’s supervisory board, told Bild newspaper that the company has lost a significant amount of money because of the incidents.

If the perpetrators are found, Deutsche Bahn would demand more than a €1 million in compensation, he said.