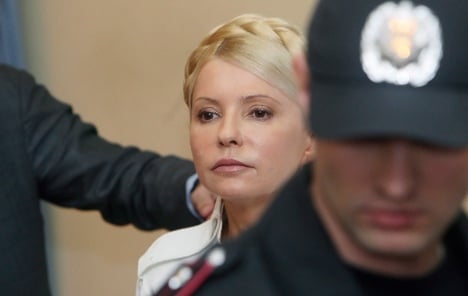 “The negotiations for an association agreement between the EU and Ukraine cannot simply be carried on as if the conviction never happened,” Polenz told the Rheinische Post newspaper. He said the trial had shattered faith in Ukraine’s legal system.

Polenz said Tymoshenko’s trial had given the impression of being about political retribution from its beginning. “The conviction removes the most popular opposition politician from public life,” Polenz said. “The EU can’t ignore that.”

Tymoshenko was sentenced to seven years in prison on Tuesday for abuse of office. She is alleged to have signed an unfavourable gas agreement with Russia in 2009.

Georg Schirmbeck, Eastern Europe specialist in Germany’s governing Christian Democratic Union, called the verdict a regression to barbarism. “The association agreement that was planned can only come about if the Kiev government respects principles of international law,” he told Wednesday’s edition of the Neue Osnabrücker Zeitung newspaper.

He also called on European leaders not to sit next to Ukrainian President Viktor Yanukovych, or any member of his government, in the stadiums at next year’s football European Championships in Poland and Ukraine. “The leaders and heads of state can cheer on their teams in Poland just as well,” he said.