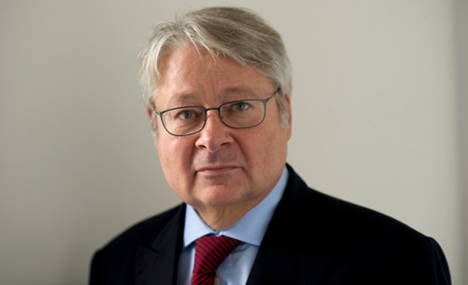 “The envoy was presented with the German government’s formal protest over the fact that a renowned German academic was unable to enter Russia yesterday despite the fact he had been issued a visa,” , a spokeswoman said. “This is unacceptable.”

The political scientist, 62-year-old Hans-Henning Schröder, is the head of the research group on Russia at Berlin’s prominent think-tank, the German Institute for International and Security Affairs (SWP).

He had been invited to a conference in Moscow organised by Russia’s Higher School of Economics and the Friedrich Ebert Stiftung, a political foundation with close ties to the largest German opposition party, the Social Democrats.

The event was called “Comparing German and Russian Values”.

The foreign ministry spokeswoman said that the “importance of the SWP in German-Russian relations” was stressed to the Russian diplomat.

“The German government insisted that the barrier to entry against Professor Schröder be lifted immediately and that he be allowed to enter the country without hindrance in the future,” she said.

Schröder told the magazine that he was not given a reason for his treatment and that he had travelled to Russia several times this year.

Der Spiegel said Schröder was not an outspoken Kremlin critic and had a reputation as “moderate” and “balanced”.

The summoning of the Russian diplomat comes a week after the German government said that independent observers would be “very useful” to ensure “democratic standards” during Russia’s presidential election next year.