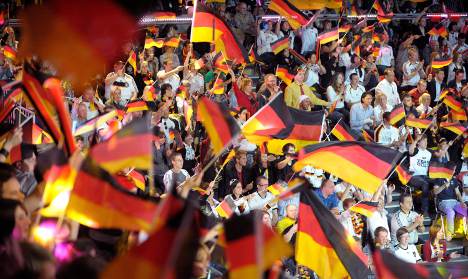 Addressing the still-stark economic differences between the eastern and western parts of the country, Merkel said there was still room for improvement.

“We have come a long way, but we have not quite made it,” she said in a speech in Bonn, the focus for this year’s celebrations.

A series of ceremonies there during the weekend were marked by optimistic speeches from prominent political figures, including Merkel, Hannelore Kraft, state premier of North Rhine-Westphalia and Andreas Voßkuhle, the president of the Federal Constitutional Court.

All called on Germans to participate more in society and keep the country’s democratic traditions alive, 21 years after Germany’s reunification in 1990.

Reunification of east and west had been a “victory of democracy over dictatorship,” said Kraft.

Remembering and commemorating it “should not become routine, we must keep it alive,” she said.

Bonn’s Unity Day celebrations dovetailed with North Rhine-Westphalia’s 65th anniversary celebrations, attracting 700,000 revellers and the cream of German society to the city through the long weekend.

Politicians were at pains to convey a sense of optimism despite Germany’s increasing worries about a shaky economy, the future of the euro and the instability of many of the country’s neighbours.

A future without a strong Europe is unthinkable, Voßkuhle said.

“This is true in good times and bad, this is true today and tomorrow,” he said.