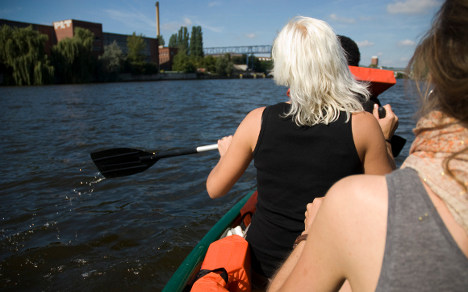 By 10 a.m. we have put paddles in the water of the River Spree southeast of Berlin. Our destination is Wannsee, the famous lake to the west of the city. Between the two lies two days of urban aquatic adventure.

The crew are Joseph (can’t swim), Ines (never been in a canoe), Eva (doesn’t like Berlin) and me. We are off to a great start.

We have found Andreas Langer’s canoe company in Teltow. He will take us and our canoe to where we want to start – and collect us at the end of our trip.

He asks me what we are doing with his canoe and I talk of history and crossing Berlin’s former divisions. He points out behind his shop, “the Wall was just back there,” he says. As we pull out a bit later I see sections of it covered in graffiti and standing in an empty field along the road.

Within minutes we are repacking our things into dry-bags and getting ready to launch. The sun is out: and after an unsteady first few kilometres, things look brighter, figuratively as well as literally.

Between the abandoned factories, sheds built on colonies of Schrebergarten – allotments – reach down to the water. People wave to us from the shore. “The people here are so much nicer on the water,” says Ines.

Near the Plänterwald, a forest southeast of Berlin, a group passes us in a motor boat, eating sandwiches. They holler “step on the gas!” They wave, laugh and buzz off towards the city. The people in the big boats always have good food.

Soon we stop for lunch in Treptower Park in former East Berlin before continuing towards the fabulous Oberbaumbrücke. The bridge is a crossing point between the neighbourhoods of Kreuzberg and Friedrichshain – and for about 45 years, East and West Berlin. This is the clearest view we will get: canoes aren’t allowed under it.

We take the only option we have and head for the other main water artery through the city – the Landwehrkanal which cuts along the boundary between Kreuzberg and Treptow. We turn west when we reach the borough of Neukölln.

At Kottbusserdamm, Kreuzberg, we stop at the Saturday market to buy beer and soft drinks and climb back in. As we paddle deeper into the neighbourhood the hot sun seems to be streaming straight down into the canal itself.

To our right the elevated metro line, the U1, emerges and runs along our side. High above, a few passengers look down at us from the passing trains.

We find a soccer ball in the water. I add it to the list of things we have discovered so far: it comes after a Styrofoam box of worms and large flower. We have stopped counting beer bottles.

As the light shifts from gold to grey, we arrive at our stop for the night. We eat dinner in a park across from gleaming towers of Potsdamer Platz, a history-laden part of the city. We are hungry and tired. The mosquitoes are hungry too, but sadly for us, they are less tired.

Our camp is nearby, an empty field that was once the “Death Strip.” The cool air is filled with the chatter cities make on Saturday nights. In the middle of this soundscape the television tower at Alexanderplatz looms silently. I am lying just metres from where the Berlin Wall once stood: this was once where two worlds met.

The next morning, continuing west, we have found our rhythm, paddles plunging into the water in sync. Ahead of us ducks chunter along. A light fog lifts off the canal near Tiergarten, the banks drop and houses give way to trees on either side.

In the distance we can hear the calls of tropical birds – we have reached the zoo. We lift our paddles and glide for a time, listening. Within wire domes we see majestic birds with long beaks perched in the trees. Behind that a monkey swings on a branch.

I close my eyes for a second and can imagine we are on the Amazon, or the Gambia, or the Congo. But we are not; just a hundred metres ahead of us the illusion is shattered by the appearance of sturdy German locks.

It is 9 a.m. and they haven’t yet opened: we portage, carrying the canoe around the obstacle. On the other shore an elderly couple in matching clothes watches our efforts.

Berlin is waking up, joggers smile as they pass and several older women stop to admire our boat and wish us luck.

A kilometre past the locks we are hit by a monster wake from a passing boat, dumping water several centimetres deep in the canoe. The clouds have come in too.

The Spandau canal is full of waves. I am thinking less of our romantic history tour and concentrating more on keeping the by now slightly mutinous crew heading towards the lake.

When we finally reach the Wannsee we have to steer clear of things – speedboats, sailboats, and canoes laden with singing German children.

The 24 kilometres we covered today have turned arms and shoulders to rubber and we gratefully set down on a patch of beach. I call Andreas in Teltow to let him know he can come get his boat.

Lying there on the beach, Eva seems to have been won over by Berlin, and while Joseph is still afraid of water, Ines wants to go on a longer trip – once her arms stop hurting.

The grey sky goes pink and the clouds break up. My thoughts turn from the dull ache in my lower back and to the paths of history we have crossed and retraced.

Andreas arrives. We load the boat and sign the closing lines of our now-damp rental agreement.

“You meet everyone twice in your lifetime,” Andreas says as we shake hands and I head to catch my approaching bus.

I smile because know it is true; I will be doing this again soon.