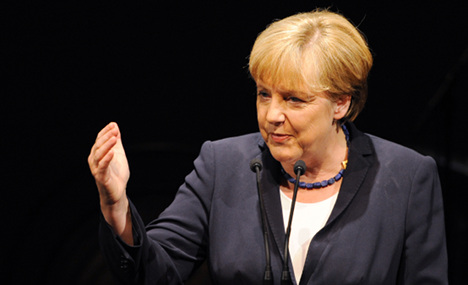 Under the spectre of a looming Greek default, Germany’s 620-member Bundestag will likely be the latest of the 17 eurozone parliaments to ratify an expansion of the €440 billion ($599 billion) bailout fund.

Pressure mounted further after US President Barack Obama said Europe’s failure to tackle the Greek debt was “scaring the world” and US Secretary of State Hillary Clinton called for a response that was “strong, flexible, and most importantly, effective.”

But Germany’s eurozone partners and financial markets are expected to greet Berlin’s approval with relief, not least because of a threatened revolt within Merkel’s governing coalition.

While the bill is expected to pass since the main opposition parties have pledged to vote in favour, Merkel faces the humiliation of having to rely on their support, raising doubts over the future of the coalition running Europe’s top economy.

Weighing up the importance of Thursday’s vote both for Europe and for the German political landscape, Berlin’s Tagesspiegel daily said it was “perhaps the most important decision” of the coalition.

“Without an approval by the German parliament, the future of the euro would be called into question,” it said in Wednesday’s edition.

German lawmakers will decide whether to expand the scope and size of the EU’s current rescue fund, the European Financial Stability Facility (EFSF), which

has already helped bail out Ireland and Portugal.

Berlin’s contribution to the EFSF would increase to more than €200 billion ($270 billion) in debt guarantees – the largest share.

International auditors are resuming talks Thursday in Greece to decide whether the government in Athens is doing enough to merit more financial aid, amid mounting social tension over the government’s austerity measures.

Two days ahead of the German parliamentary vote, Greek Prime Minister George Papandreou insisted during a visit to Berlin that Athens was making a “superhuman effort” to bring down its debt.

Merkel, in response, pledged every assistance. “We want a strong Greece in the euro area … Germany is ready to give all the help required,” she said.

But if Merkel fails to get a so-called “chancellor’s majority,” meaning if 19 or more coalition members vote against, it could prove a blow that risks destabilizing the coalition.

“If Merkel does not get enough votes from her own camp, it would be a sign of weakness. The financial markets would probably go crazy again. And Germany would have a huge government crisis,” the mass circulation Bild said.

Slovakia has announced it will not hold its parliamentary vote until October 25. Finland, another country with deep-rooted reluctance to bailing out eurozone strugglers, finally approved changes to the fund on Wednesday.

had ratified the boosting of the fund.