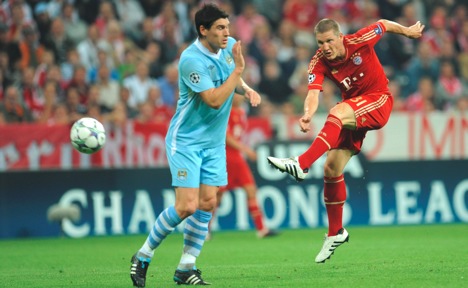 After their 2-0 win at Villarreal a fortnight ago, the result leaves Bayern firmly in control and top of Group A as the German league leaders subdued City’s star-studded attack.

City have huge problems aside from the defeat as City manager Roberto Mancini insisted striker Carlos Tevez is ‘finished’ after the Argentinian refused to come on in the second-half.

But his opposite number Heynckes was delighted as Gomez’s two first-half goals capped a convincing display from the home team.

“We chose just the right time to score and then played very confidently,” said Heynckes, who won the trophy in 1998 as coach of Real Madrid.

“At the beginning of the game we were nervous, but we changed things around

midway through the first-half and came into the game,” he added. “Ribéry put in a world-class performance, as did Schweinsteiger. In the second-half, we played as a unified whole.”

“At the moment we have not only a great team spirit, but are playing in harmony with lots of awareness of the spaces from some outstanding individuals.”

With 11 goals in his last seven games, Gomez said Bayern had suffered from nerves at the start, despite picking up their 10th straight win.

“We were perhaps a little nervous, which is really inexplicable, because we are actually in a purple patch,” said Gomez. “As a team, we started playing well after 30 minutes and ultimately deserved to win.”

After soaking up City’s early pressure, Bayern took the lead on 37 minutes when Manchester goalkeeper Joe Hart could only parry a Ribéry shot, then blocked a Thomas Müller effort, before Gomez made no mistake from three metres out.

Gomez struck again in similar fashion on the stroke of half-time when Daniel Van Buyten’s header was saved by Hart, but the ball fell to Gomez who tucked his shot into the back of the net.

It was Bayern’s 30th goal of the season and although City tried everything after the break, they could not break the Munich defence.

With City’s fans subdued by their team’s display, the Munich fans treated their English guests to a few chants of ‘You Only Sing When You’re Winning’ – that said it all.

“We have put ourselves in good position to qualify for the knock-out stages,” beamed Bayern CEO Karl-Heinz Rummenigge with Munich set to travel to Napoli for their next game on October 18 the same night City host Villarreal.