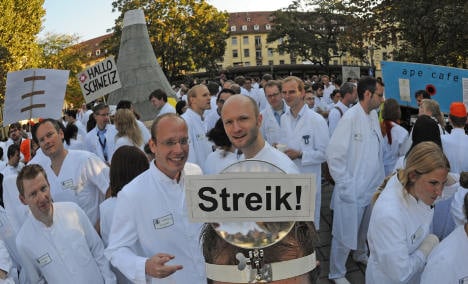 Göttingen’s University Hospital doctors also went on strike for two hours in the afternoon, while other university clinics in Tübingen, Jena and Düsseldorf are expecting strikes in the next few days.

“The actions are a warning shot to the TdL,” said MB wage expert Lutz Hammerschlag.

“We have had a lot of patience in the collective bargaining rounds and, despite all the employers’ demands, held out for a fair negotiated settlement. The destructive behaviour of TdL has – up to this point – not made a compromise possible.“

“For full-time work during the night, doctors at university hospitals get a mini-supplement of €1.28 per hour – that’s not even enough for a cup of espresso,” according to MB claims.

He pointed out that janitors receive the same supplement for night shifts, as agreed on during talks in March.

In light of the current dispute – the fourth round of negotiations with the TdL earlier this summer remained inconclusive – doctors at university clinics are hoping this week’s strikes will pressure the wage commission.

But the TdL is preparing for the next bout of bargaining, and is clinging to statistics in defence of its stance. It says the increase demanded by the doctors would mean monthly increases of up to €936 per month, which the TdL refuses based on the already significantly improved working conditions since 2006.

Based on the TdL‘s salary table, junior doctors working 42 hours per week start at a monthly rate of €3,845 during the first year of service, increasing to €4,063 during their second.

In comparison, at the university hospitals in Hamburg-Eppendorf and Leipzig, neither solely dependent on TdL decisions, monthly salaries start at €3,842 and €3,708, increasing to respectively €4,063 and €3,947 after one year. The Hamburg-Eppendorf wage, however, is based on a 40-hour work week.

Another concern for the MB is the growing number of positions at the university clinics left unoccupied as qualified doctors seek better options elsewhere. In a 2010 MB member survey, 19 percent of physicians reported four or more vacancies in their departments, and 53 percent of respondents said they were considering leaving the university hospitals. This trend will increase if working conditions and salary prospects do not improve, Hammerschlag said.

“The TdL is ignoring the reality at the university hospitals,“ he said. “Despite multiple burdens of patient care, research and teaching, doctors at the university clinics are the worst paid compared to other clinicians. This lack of recognition for their work will not not be tolerated by university doctors any longer.“

Lower Saxony Finance Minister Hartmut Möllring, chairman of the TdL, was not available for comment Monday.

Around 20,000 doctors at 23 university clinics would receive 6.3 percent more money should the MB get a favourable outcome. The estimate combines the five percent salary increase with further improvements.

The TdL is the employers’ federation for 14 German states. Brandenburg and Bremen do not have university hospitals. The university clinics of Mainz, Mannheim, Hamburg-Eppendorf, Dresden, Leipzig and Halle/Salle also have separate wage agreements.