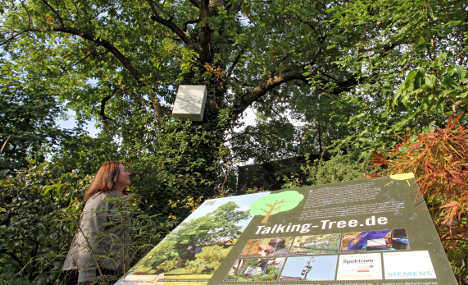 Kim, a 150-year-old oak tree in the Erlangen Botanical Gardens, northern Bavaria, sends out regular tweets on what is rustling her leaves.

“A squirrel is getting on my nuts right now – thankfully I have enough of them!” she tweeted on September 15.

“Time for production – it’s photosynthesis weather!” she said on September 2.

Since putting down roots in the world of social media last this May, Kim has already gained nearly 3,500 Facebook friends and more than 1,000 Twitter followers. The 18-metre oak also has a blog where she posts more in-depth stories on her life and nature-related issues.

Kim’s “voice” is provided by researchers at the University of Erlangen and the magazine “Spectrum of Science”. Scientists use a plethora of instruments located in the so-called black box on the tree’s trunk to measure the oak’s growth – and also as fodder to translate into short text updates for fans to follow.

Some of the notices Daniel Lingenhöhl – online editorial director for the magazine posts on Kim’s behalf are relatively impersonal – based on data gained by a plethora of instruments located in the so-called black box on the tree’s trunk to measure the oak’s growth.

“Nights are slowly becoming quite cool. And damp in the morning,” read one.

But the prospect of scientists trying to work out her age prompted the note, “How many annual rings? No idea. To figure that out, the researchers have to bore into me. I’ll have to think about whether I want that.”

And in June, when a local festival was drawing to a close, she seemed to express frustration with her earth-bound situation, tweeting, “Will someone please bring me a Maß of beer round? Today’s the last day of the festival and I don’t want to always just drink rain.”

Yet the project has a serious aim – to try to attract the internet generation’s attention away from their computers and onto nature.

“My wish would be that people would go out into nature, but when this doesn’t happen by itself, perhaps this (is) a roundabout way,” Walter Weiß, curator of the Erlangen Botanical Garden, told The Local.

He said the twittering tree could become an important representative of the natural world and strengthen ties between the human online community and the environment.

This project should help “make people aware that trees are not just there, but they also grow and are impacted by the changing environment,” Weiß said. And, in order to emphasize this point, he said it was “not bad at all to personalise a tree so that one can see how it’s doing.”

Kim’s army of followers is, “not bad for a tree,” said Lingenhöhl. But he admitted she was lagging well behind the competition – there is a tree in Belgium which has 17,000 Facebook friends.

The Erlangen project is scheduled to continue into 2012, and will become particularly interesting in the spring said Lingenhöhl, since that is the most exciting time for tree development. Researchers are also hoping to expand the idea internationally, introducing a variety of different tree types via social networking.