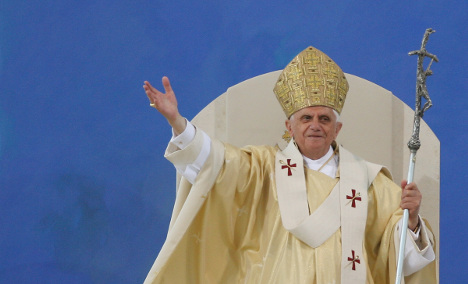 Grievances over the Vatican’s “out of touch” attitudes towards sexuality and the family are likely to underlie the pontiff’s three-day visit to Berlin, Erfurt and Freiburg.

While Benedict is not expected to make any concessions to demands for the Church’s rules to be modernised, the Holy See is well aware of growing dissent – particularly in Germany, Austria and German-speaking Switzerland.

Frustration with the Church’s staunch adherence to tradition came to the fore in Germany after the Second Vatican Council (1962-65), with the rise of reform movements such as “We Are Church” pushing for change.

In Germany, where the Protestant and Catholic communities are roughly the same size, much emphasis is placed on rights linked to personal life choices. The close proximity of the two faiths has also turned the country into a sort of laboratory for Christian thought.

Young Catholics – who often marry Protestants – are increasingly seeking the sort of freedoms enjoyed by the Protestant faith where women can become priests, ministers can marry and homosexuality and divorce are accepted.

The cleric sex abuse scandal has done nothing to help the Church’s position.

“Protestantism is generally considered ‘progressive,’ and in touch with the times,” German historian and specialist Etienne Francois said.

There is “the idea that being celibate goes against nature, that the institution is nothing but an old, anachronistic machine which blocks the evangelical message and which needs to be profoundly modernised,” he said.

While the tension between conservatives and progressives within the Roman Catholic Church goes back decades, it flared up once again at the start of the 2000s, when the Vatican ordered the Church in Germany to stop its involvement in abortion advice centres.

The head of the Episcopal Conference, Robert Zollitsch, who suggested in 2008 that celibacy for priests could be reviewed, has called for divorced people – such as the German President and member of the Christian Democratic Union party, Christian Wulff – to be able to take communion.

The rising number of Catholics who are adopting liberal positions worries the Vatican. In Austria, an appeal for disobedience – signed by 330 authors – was judged to be “justified” by three quarters of the population.

The pope, say those who know him well, is very aware of the “wound” caused by the number of faithful divorcees, but a change in position is nonetheless improbable – and the same goes for recognising gay Christians.

The Holy See insists that Benedict XVI “proposes” rather than “imposes” teachings and that his speeches avoid moral condemnations and reflect his respect for freedom.

As for the question of female priests, a salient issue in Germany, the pope points to the Gospels – in particular the fact that Jesus was surrounded by unmarried male apostles – to insist that a reform is not in his power.