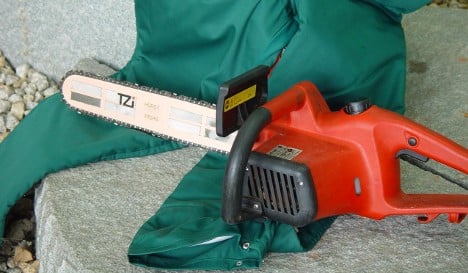 The average cut from a chainsaw is deep, ragged and takes 110 stitches to close: currently the protective trousers to save legs from such injuries are heavy and hot, making tree work uncomfortable and difficult.

Researchers at the Hohenstein Institute and the University of Bremen hope hope their solution will be able to tackle both of these problems.

They have lined their trousers with sensors which are triggered by the approaching saw – and turn it off. Prototypes are already being tested in the field – or in the forest.

“We’ve successfully integrated the sensors into clothing. We’d like to improve the washing cycles, especially for industrial care,” said the Institute’s Dr. Jan Beringer, director of the Department of Textile Services and Innovations at the privately-run textile and consumer products research organisation, based in a restored castle off the Neckar River near Stuttgart.

The system works by having switch contacts weaved into throughout the trouser fabric: the contacts, each a few centimetres long and hermetically sealed, contain highly sensitive fibres or “reeds” which sit a small gap apart from one another.

The fibres need a magnet to connect them, at which point they activate a switch to send a radio signal to switch off the chainsaw.

The magnet to connect them is contained in the guide bar of the saw – so as soon as it gets too close to the trousers, it connects the fibres in the trousers which switches the buzzing saw off.

The radio transmitter is battery-operated, and if the battery level falls below an effective charge, the power saw is also switched off so the user can change batteries.

The researchers built the trousers for wearers moving around in heavy labour; the sensor-laden textile is lightweight, robust and smooth. And despite Beringer’s desire to further improve laundry performance, tests already show they can be washed many times without affecting the sensor system.

Former tree surgeon Tim Hayford bears a 15-centimetre scar on his leg from where a chainsaw ripped through the conventional protective trousers he was wearing while up a tree. The saw caught a faulty seam which then tore, exposing his flesh to the blade.

But you can count Hayford as a sensor-trousers skeptic. “Chainsaw trousers which are not faulty should protect you in most cases as it is,” the Briton told The Local from his farm in Devon, UK.

“The trouble [with conventional protective trousers] is that they are very heavy and stiff and you get very hot with them. This new idea would be attractive if it would allow you to wear lighter-duty trousers, but I’m not sure you would want to trust an electronic signal completely.”

Hayford figures if his trousers were not defective, he would have been protected.

German forestry workers sustained some 17,300 job-related injuries in the decade from 1999 to 2009, according to statistics from the Board for Forest Work and Technology. This is in a workforce which is currently pegged at about 25,000; in a typical year about 5 percent of the workers would receive some kind of injury, mostly from falling branches.

About 20 percent of German forest-related injuries are cuts, according to the board. The last such injury survey taken by the United States Consumer Products Safety Commission counted 28,500 total chainsaw injuries in 1999; 36 percent of which were injuries to the legs or knees.

Hayford’s other objection is that the sensor might be too much—it is set to go off somewhere between five and 10 cm close in to the user’s legs. “In some circumstances you might be in a tiny space and it might be extremely frustrating if the saw cuts off all the time,” he said.

But he does figure that if the problem is a nasty, out-of-control approach from the chainsaw, the sensor-controlled brake could be useful. This out-of-control business can happen during a chainsaw “kickback” — when the teeth of the saw catches on something while rotating around the tip of the blade—which is the largest single cause of injuries from chainsaws every year.

Beringer says that the sensor field is adjustable and while no system can be 100 percent, tests show the protective sensor trousers can be 99 percent effective and deliver lightweight protection. While most chainsaw injuries happen to professional foresters, 3.4 million of which work in Europe alone, hundreds of thousands of saws are sold every year on top of that to private buyers.

The researchers face just one more snag in reaching that market—finding a chainsaw manufacturer as a partner to go with the trousers.