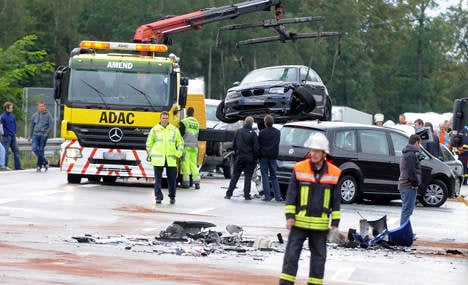 About 20 vehicles were piled up at the main crash site near the Homberg (Ohm) junction on the A5 motorway, authorities said, where 22 people had been hurt, four seriously.

That caused a traffic jam-up and there was subsequently a second collision involving several more vehicles, which left an additional 10 people injured.

To make matters worse, three firefighters speeding to the scene were injured in a third collision.

In one of the accidents, a baby had to be resuscitated and taken by rescue helicopter to the hospital.

Officials are investigating what happened, although it appears the chain events was started when someone ran into a car parked on the motorway shoulder at about 2:30 pm.

Authorities were on the scene late into the evening, collecting evidence and trying to piece together what had occurred.

“We still have plenty of debris lying on the road,” said a police spokesman.