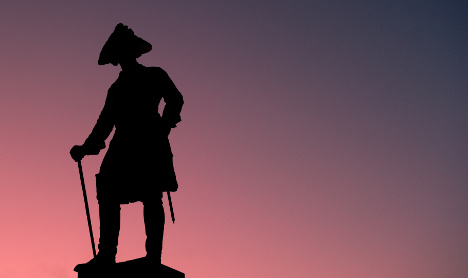 It was just a few weeks after he had reluctantly accepted the crown and become king that Friedrich wrote the poem. Dated July 20, 1740, a note accompanying it said it was the only one he had had time to compose since becoming ruler.

The poem was unearthed by Vanessa de Senarclens, a teacher of French literature at Berlin’s Humboldt University.

Writing in Die Zeit weekly paper, she said that a copy of the poem found its way from Italy to Berlin in 1894 and was quickly put into the royal archive where it was buried.

Even in 1912, when much was done to mark what would have been Friedrich’s 200th birthday, the poem was excluded from a new ten-book edition of his collected works.

“A poem which praised sexual desire as the ruler of the world was difficult to reconcile with the image of the great commander, high patriotic duty and the ideal Prussian monarch, in a time of deepest national seriousness,” wrote Senarclens.

Friedrich had sent the verse to his friend and mentor, the French philosopher Voltaire, having written it in French – the king’s preferred idiom and the language of many royal courts of the time. Yet it was written for and about an Italian friend Francesco Algarotti.

“Its topic is desire. The Italian thought he knew that the inhabitants of the north are not in a position to feel things as our neighbours do on Lake Garda. I have felt, and have and have described it as well as I can in order to show him that despite our constitution, we are capable of feelings.”

He pleaded with Voltaire to review the poem, adding, “Remember, there are moments that are as difficult to describe as the sun in its splendour.”

The rather excited start to the poem describes how Algarotti swims in a sea of pleasures, where he finds his love Chloris, whose perfectly formed body, “increases the new passion of his senses,” and into whose arms he sinks.

The love which joins them heats their kisses,

And leaves them entwined even closer,

Heavenly sensuality! Ruler of the world!

Witness in my verses with your voice,

Her fire, her conduct, the ecstasy of her senses!

Our happy lovers, in their most extreme passion,

In the exuberance of love they knew only themselves,

Kisses, which dissolve in passion, sighing and die,

Arise again in a kiss and become passion again.

And finally, in a passage which Senarclens suggested illustrated the dichotomy felt by Friedrich between his royal duties and his personal desires, he wrote,

Happy, he whose spirit is never decayed by the pomp of power,

And who knew pleasure,

A moment of passion is, for those who enjoy it,

Worth as much as a century of honour whose appearance deceives.