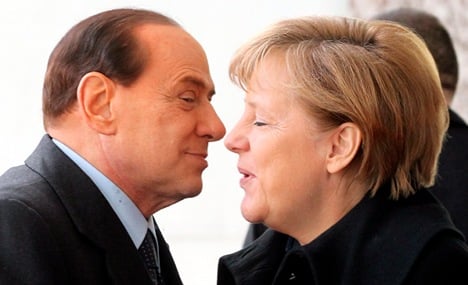 The call between Berlusconi and a businessman was recorded by investigators during their search for evidence against the 74-year-old politician for a variety of charges including corruption.

Although the recording has not been released so the exact phrase Berlusconi used is unclear, it is said to be extremely insulting and concern Merkel’s physique.

Italian MP Rocco Buttiglione brought the gossip out of selected newspaper columns and into the open this week, according to Bild newspaper.

He told parliament: “If the rumours are true, which are not only circulating in journalist circles but also in parliament, that the Prime Minister has spoken about Merkel in an unspeakable, unpronounceable, unacceptable way, the situation would be dramatic. Someone who has reached out their hand to us would be spat at in the face.”

He said the rumours were already causing damage to German and Italian relations.

Berlusconi has already faced domestic outrage over the phone call for allegedly calling Italy a “shit country” that he planned to leave soon.

Merkel and Berlusconi have had public mishaps in dealing with each other in the past, with one example mentioned by Bild being in 2009 when Berlusconi arrived in Germany for a Nato conference. He got out of his car while on the phone and ignored Merkel, walking past her still talking on the phone.

Germany has been complaining that Italy is not doing enough to stem Europe’s brewing sovereign debt crisis and the countries clashed recently over reparations for victims of World War II.

The Italian practice of giving economic migrants from Tunisia travel documents, and effectively sending them elsewhere in Europe has also proved unpopular among the country’s neighbours.