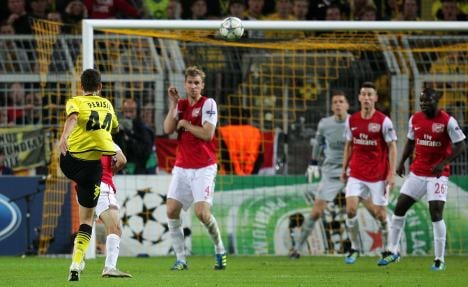 Perisic does the business for Dortmund. Photo: DPA

Although they had more than twice the attempts on goal than the Gunners, Dortmund had to wait for an 88th-minute equaliser from Croatia midfielder Ivan Perisic to claim a point after Arsenal captain Robin van Persie’s first-half strike had put the Gunners ahead in the Group F clash.

After his captain Sebastian Kehl was at fault for Van Persie’s goal, Dortmund coach Jurgen Klopp was in philosophical mood.

“I was happy with a good performance from Sebastian Kehl, he is just coming back from injury and it was an unlucky situation.

“I told the lads at half time, even though we were 1-0 down, if we kept playing like we had done, then we would get a good result.

“I am very satisfied with the overall performance from a young side lacking experience at this level.

“We played really, really well over 90 minutes: we were cheeky, we were brave and at the end we got our reward.”

It is Arsenal’s 14th successive season in the tournament, while Dortmund has been away for nine years – and the difference in experience showed.

The hosts had 22 attempts on goal compared to Arsenal’s eight and Rice says his side did very well to leave Germany with a point.

Arsenal assistant coach Pat Rice insisted his side has proved they are over their poor start to the season after earning a 1-1 draw at Dortmund in their opening Champions League clash.

“To defend with such determination is a high quality skill and I don’t think many teams will come here and get a result,” he said.

“Of course, we would have loved to have got the win here, but you can argue a point apiece is a good result.”

Arsenal have struggled this season after the sale of captain Cesc Fabregas and play-maker Samir Nasri, while injuries and suspensions culminated in the humiliating 8-2 defeat at Manchester United a fortnight ago.

The Gunners picked up only their first Premier League win of the season on Saturday with a 1-0 win over newly promoted Swansea, but the draw at Dortmund’s 65,000 sell-out stadium proved Arsenal were on the way back, claimed Rice.

Coach Arsene Wenger was in the stands as he serves a two-match Champions League ban and his stand-in Rice said recent results showed the Gunners’ crisis was receding.

“It seems Saturday’s win over Swansea was the start of the season for us,” said Rice, who admitted he missed Wenger on the Arsenal bench.

“Before that there was so much uncertainty with regards to who would leave us and who wouldn’t.

“The players who have come in are quality and I am convinced they will show that over the games to come.”

Three of the new signings, midfielders Mikel Arteta and Yossi Benayoun, plus defender Per Mertesacker started against Dortmund, while Andre Santos was on the bench.

Rice insisted it was just a matter of time before the new signings found their feet in England’s Premier League and the Champions League campaign, especially Mertesacker, who seemed to struggle on occasions against Dortmund.

“I thought Per Mertesacker did very well, you can’t play as many games for Germany as he has and be a bad player, it is just not possible.”