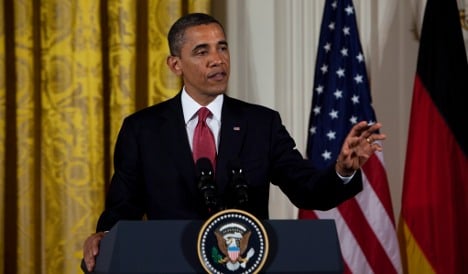 As long as Europe’s sovereign debt crisis, “is not solved, we will continue to see weaknesses in the global economy,” he said on Monday night in an interview with several European news agencies.

“At the end of the day the big countries in Europe and their political leaders have to come together and make a decision on how they can bring currency integration together with a more effective and coordinated budget policy,” he said.

Although he did not specifically name Chancellor Angela Merkel, as the biggest economy in the continent, Germany is key to resolving the matter.

The situation in Europe would certainly have consequences for America, he said.

“We live in an integrated global economy today. What happens on the other side of the Atlantic or Pacific has considerable effect on America, on our entire continent, not just on the USA,” he said, adding that his government was working intensively with the Europeans to help try to solve the current crisis.

Merkel spoke on the radio on Tuesday morning calling for calm in the face of the crisis. “What we do not need is turmoil on the financial markets,” she told the public broadcaster rbb Inforadio. “The uncertainties are already big enough,” she said, adding everything must be done to hold the eurozone together politically.

She called upon the Greek government to increase its efforts to get spending under control, saying all economies in the eurozone had to do their homework and contribute to stability. “We can only have a currency union which includes 17 countries and where all have a stable euro, when we prevent uncontrollable processes,” she said.

European parliamentarian Elmar Brok, from Merkel’s Christian Democratic Union accused Economy Minister Philipp Rösler, from coalition partner the Free Democratic Party, of talking up a potential Greek bankruptcy after his comments on Monday that an orderly default could be possible.

“It is clear: the collapse of Athens would be the worst and most expensive solution for Germany,” he told the Rheinische Post newspaper. He said Rösler’s suggestion of an orderly Greek insolvency was unlikely. “The orderly bankruptcy of a state within the eurozone is not possible under current international rules,” said Brok.

A controlled waiver of half the debt could only be feasible if all creditors were agreed, which Brok said was unrealistic. “An uncontrolled state bankruptcy with a total cancellation of the demands would have incalculable consequences,” he said.

Government economics advisor Peter Bofinger warned of a possible chain reaction through the eurozone if Greece did not receive the financial help that had already been agreed.

“If Greece does not get any more help, there will be an uncontrolled insolvency with the result that the Greek bank system will collapse and the risk of an enormous chain reaction which could be even worse than the Lehman collapse of 2008,” he told the Saarbrücker Zeitung on Tuesday.

“Greece needs more time to consolidate. The idea of giving quarterly deficit targets where in a quarter the economy has fallen by nearly seven percent is absurd,” he said.