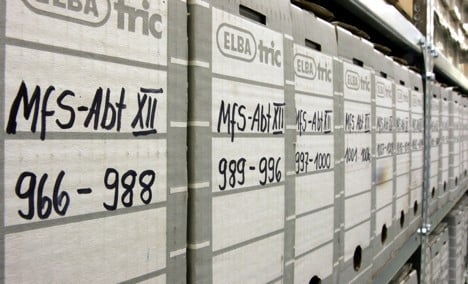 Reiner Deutschmann, cultural spokesman for the Free Democratic Party, told Monday’s edition of the Mitteldeutsche Zeitung newspaper that the relevant law would soon include a clause that said, “anyone who officially or unofficially worked for the Stasi is not allowed to work for the authority.”

Deutschmann said the governing coalition’s two ruling parties, the Christian Democratic Union and the FDP, were in agreement on the change in the law. Director of the authority Roland Jahn also supported the change, he added.

When Jahn took over the authority in April, he said he wanted to move the 47 people employed there who had previously worked for the Stasi, to jobs in other authorities.

Wolfgang Thierse, vice-president of the German parliament, criticized the decision. “I think a law devised by Jahn is legally problematic,” he told the paper.

Green party parliamentarian Wolfgang Wieland said personnel questions should not be part of the law that deals with Stasi files. “The law is there to determine how the files are administered,” he said. “To introduce a passage about dealing with drivers and doormen is a break in the system.”

The government is intending to change the Stasi-files law in the autumn anyway, in order to extend investigations into the possible Stasi past of senior public service workers until 2019.

The opposition Social Democratic Party (SPD) and the Greens only want this to apply in the case of verifiable suspicions.