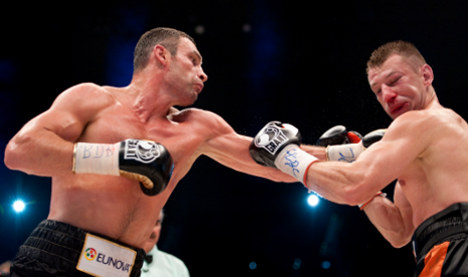 The 40-year-old Ukrainian beat challenger Tomasz Adamek with a 10th-round technical knock-out. Klitschko out-classed Adamek, a former cruiserweight and light-heavyweight world champion, on Saturday night in Wroclaw, Poland, and Klitschko is now eager to get Britain’s Haye into the ring to settle a score.

Haye lost his WBA heavyweight belt to younger Klitschko brother Wladimir in Hamburg in July with a unanimous decision, but after the Brit’s constant trash-talking, Vitali Klitschko has said he wants to floor the Londoner.

The Klitschko brothers were insulted when Haye appeared at a press conference in 2009 wearing a t-shirt showing an image of him in the ring brandishing the severed heads of both Ukrainian heavyweights.

Haye has said he will delay plans to retire this October, if either Klitschko sibling will fight him and Vitali Klitschko says he wants the fight to go ahead.

“Haye is the best boxer – in trash talking,” said Klitschko after beating Adamek.

“I am saying that I want to fight him. Why? Because he has personally insulted me deeply. I want to knock him out.”

Haye has told German daily Bild that he wants another chance at a world title.

“If I am given a rematch against Wladimir – which I do not believe I will – or Vitali will fight me, I will postpone my retirement for six months,” said Haye, who turns 31 next month.

“Vitali should give me the chance, if he dares. He is supposed to have a dangerous punch, which I doubt.”

Klitschko had few problems against Adamek and out-classed the 34-year-old, who fought on bravely before the referee put a stop to the fight.

“Tomasz is the best boxer in the world, but not in the heavyweight division, it was a mistake for him to step up,” said the WBC champ.