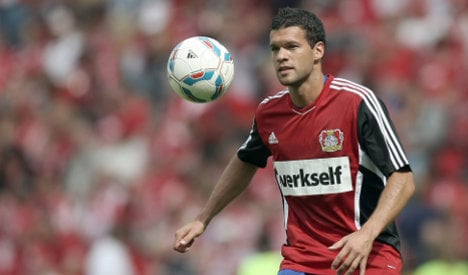 Having left Stamford Bridge last year, the former Germany captain, who turns 35 at the end of the month, was impressive in Friday night’s 4-1 Bundesliga win at Augsburg for Leverkusen which put his team top of the league before Saturday’s games.

Leverkusen have a strong midfield and coach Robin Dutt has been operating a rotational system.

The Premier League side host last season’s German runners-up at Stamford Bridge, but Ballack must wait to find out if he will start against his old club having spent four seasons in London.

“I was very happy with Michael Ballack, he was particularly strong going forwards,” said Dutt.

“Whether he plays on Tuesday against Chelsea, I do not know yet. There are many players fit for Tuesday, we are going to reveal who will play, but not yet,” Dutt said.

“The match at Chelsea will be very different. Augsburg kept us busy tonight and it is important that we regenerate quickly.”