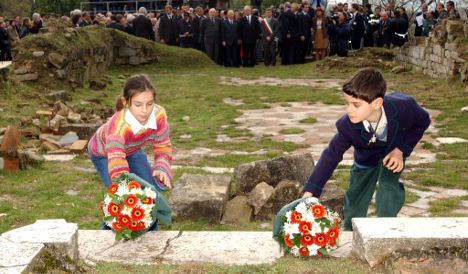 Children lay wreathes at the site of a Nazi massacre in Italy. Image source:DPA

From Monday, the two countries’ lawyers will argue their cases before judges of the International Court of Justice (ICJ), where Germany applied in 2008 to stop Italy from allowing civil claims for Nazi war crimes.

Germany will put its case forward on Monday, Italy will follow on Tuesday, then on Wednesday, Greece, a “non-party” state in the case, will state its position.

A second round of arguments will follow Thursday and Friday before judges retire to make a decision.

Germany has argued that by permitting claims for abuses, committed between September 1943 and May 1945, Italy “failed to respect the jurisdictional immunity” that modern-day Germany enjoyed under international law.

Germany has urged the ICJ to order Italy to live up to its international responsibility and take steps to ensure decisions by Italian courts “infringing on German sovereign immunity” cannot be enforced.

“To date, approximately 250 plaintiffs have brought civil actions against Germany, pending in 24 district courts and two appeals courts,” Berlin said in its application.

Also before the Hague-based court is Greece, because relatives of victims of a 1944 massacre at Distomo, Greece, which claimed 218 lives, turned to the Italian courts after their case stalled in Athens.

In 1997 a Greek court ordered Germany to pay €28.6 million ($37 million) to the Distomo plaintiffs, but opposition from Berlin and reluctance from Greek justice ministers meant the ruling was never enforced.

An Italian court, however, enforced the original ruling and slapped a financial charge on two buildings owned by the German state.

Germany has always refused to pay, saying the issue of compensation was settled by a bilateral agreement with Greece dating from 1960.

Established in 1945, the ICJ is the UN’s highest judicial organ and settles disputes between states. It is the only one of the six main UN bodies not located in New York.