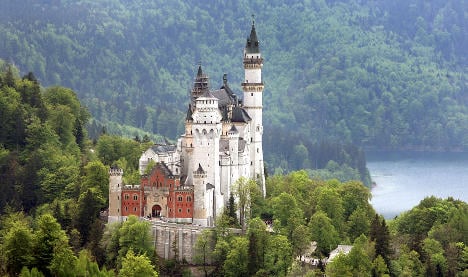 The museum is housed in the former Grand Hotel Alpenrose on the shores of the Alpsee, a lake made famous by its proximity to two castles: Hohenschwangau and Neuschwanstein, the white palace built by Ludwig II and popularized by Walt Disney’s iconic castle.

With 1,000 square metres of exhibition space, the museum will explore the Wittelsbach family, who ruled from 1180 until the 1918 revolution in Bavaria.

Over a million tourists visit the fairy tale castle of Neuschwanstein every year, and the Wittelsbach Equalization Fund, which manages the property and possessions of the former ruling dynasty, hopes to attract around 200,000 of those visitors to the new museum.

“People are fascinated with Neuschwanstein, but they return from their visits with many unanswered questions,” said Elisabeth von Hagenow, the art historian who coordinated planning, construction and conception of the museum over the last three years.

The 800-year family history will be presented in the two-story space. An exhibition highlight includes the “walk in family tree,” which offers visitors an extensive orientation to the Wittelsbach dynasty. Porcelain, jewellery and portraits also illustrate the family’s influence.

One of the most valuable displays, according to Luitgard Löw, the new museum director, is the 90-piece precious carved tableware set – a wedding gift from Ludwig I to his son and heir, Maximilian II.

Visitors, however, may be more impressed with the spectacular dress coat that belonged to Ludwig II. The museum also has an entire section dedicated to the “Swan King” and the legends surrounding his life and death.

The museum is not merely intended for tourists, though, von Hagenow said. “We also want the acceptance of the residents of Schwangau.”

It’s not a coincidence that the museum is located in the Allgäu region, nestled in the shadow of the royal palaces. The Wittelsbach family has always been closely connected with the area and its inhabitants, Löw said. In fact, the current head of the house of Wittelsbach, Duke Franz of Bavaria, was an advisory board member during museum construction.

The natural surroundings were also an important factor in deciding on the museum’s location.

“We don’t want to use the museum to turn the Wittelsbach house itself into a memorial,” von Hagenow told newspaper Die Welt. “It was important to us to bring the landscape into the museum, to show how important the extraordinary location in nature and on the lake was for the Wittelsbach family.”