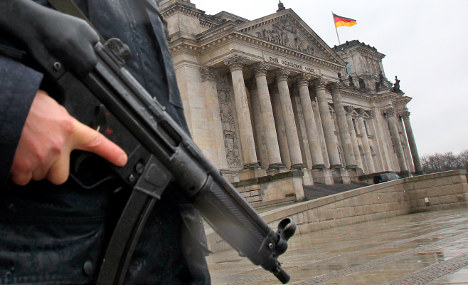 “It has become the new major threat and the global community will have to continue to work together to learn how to combat this threat,” she told private broadcaster RTL. “It is time to thank our officials, and the international cooperation is also working superbly. But we have to be vigilant at all times.”

Merkel said many had hoped that the end of the Cold War would mark the end of large-scale conflict in the world. “This hope did not last long,” the chancellor said, adding that the increase in security legislation following the terror attacks on the US in 2001 had been necessary.

“I am prepared to accept stronger controls,” she said.

On Thursday, police in Berlin arrested the two men on suspicion that the chemicals they had been recently acquiring were part of a planned terrorist attack. The men had collected large quantities of coolant and acid used in agriculture. Police said the suspects intended to mix the substances to make a bomb. An Islamic culture club and two apartments were also searched as part of the operation, involving 230 officers.

The authorities were due to decide on Friday whether to charge or release the 24-year-old German of Lebanese origin and 28-year-old Palestinian.

According to information obtained by news magazine Der Spiegel, a foreign intelligence agency tipped off the German authorities at the end of June about a possible attack. The investigation was also helped after companies in Berlin and Baden-Württemberg informed the authorities about suspicious orders for large amounts of chemicals.

The two arrested men can be charged under Paragraph 89, a piece of legislation passed in 2009, which makes planning a terrorist attack a crime. The city of Berlin’s Interior Minister Ehrhart Körting said the operation’s success had been thanks to the new law. The police had not had to wait “until there was an immediate danger and possibly it was too late.”

The two men are not thought to belong to an international terror group, but rather were acting alone. “It seems to be two culprits, who decided here to plan something.” The plans were at a very early stage, he added.

Speaking on Deutschlandfunk radio station, Körting said that security measures alone were not enough to prevent homegrown terrorism in Germany. “We need a dialogue with all of those who reject violence, in particular the many, many Muslims who reject violence and acts of terrorism.” Only then would is be possible to prevent terror attacks by Muslims living in Germany.

The foiled attack has opened up the debate on data retention, whereby phone and internet companies are compelled to keep date on their customers’ calls and website visits for a certain period.

Körting said that data retention it had not been an important factor in the arrests, as the authorities had been observing the two men for some time. However, German Interior Minister Hans-Peter Friedrich, reiterated his support for such a measure:”I think it is necessary that we have more possibilities than previously in the face of the threat.”

Friedrich said that defending the country against terror attacks had become more difficult. Speaking on Südwestrundfunk radio on Friday, he said this was due to the “decentralization of terrorist structures.”

The authorities are not dealing with large groups but with small cells of two or three people. He said the arrests on Thursday point to the latent threat posed by people living in the country.

The two suspects have refused to make any statement to investigators, according to information obtained by the Berliner Morgenpost. The paper reports that the police found forged Bulgarian identity papers in one of the apartments.

The Federal Prosecutor’s Office, which usually deals with terrorist cases, has so far not become directly involved in the investigation. They can only do so when there are concrete indications that a terror attack was being planned, which may be difficult to prove in this case because the authorities acted at such an early stage.