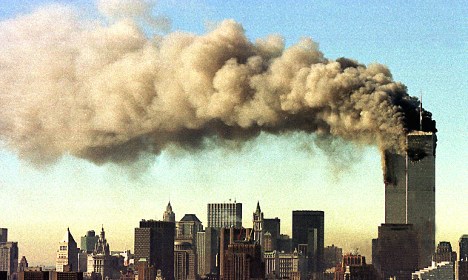 Just a few days after September 11, 2001, with the fallen twin towers still smouldering and the world in turmoil, a group of people gathered on an unremarkable street in Hamburg, looking up at a first-floor window.

The building at Marienstrasse 54 had by then become the notorious terrorists’ nest – the place where Islamic extremists supposedly had planned the worst terror attacks the world had ever seen. Neighbours were horrified to discover that the 58-square-metre flat had been home to Mohammed Atta, who piloted a plane into the World Trade Center, and his co-conspirators.

Manfred Murck at the time was deputy director in charge of extremism at Hamburg’s branch of the Office for the Protection of the Constitution – Germany’s domestic intelligence service. He was actually in hospital on September 11 after having an operation on his knee.

By the time he had recovered enough to call the office, it was frantic – information had emerged that some of the hijackers had lived in his city and the operation was underway to work out what had been known – and to try to sweep up any supporters still in Hamburg.

Now director of the office, Murck told The Local that the disparate group of young men who were to form the core of the terror attack – three of the hijack pilots, Atta, Ziad Jarrah and Marwan al Shehhi, as well as some of the more important organisers – undeniably become acquainted and radicalised in Hamburg.

Plans were made in Afghanistan

But he said the plan to fly planes into buildings was not formed in Germany – that came from senior al-Qaida members in Afghanistan.

“They were Muslims in the Diaspora who found each other at university or at a mosque and developed their world view together. And then as a group at some point radicalised, in Hamburg, to such a point that they decided to take part in Jihad themselves,” Murck told The Local.

“Then they decided to do something, maybe even become suicide bombers. That was the part which took place in Hamburg.”

They left for training camps in Afghanistan in late 1999 – having talked of preparing to fight the Russians in Chechnya – and were recruited by al-Qaida.

The US Congress’ Commission on 9/11 concluded that al-Qaida leaders including Khalid Sheikh Mohammed had been planning to use hijacked planes as weapons for a considerable time. The Islamists quickly scooped up Atta and the others as suitable operatives who could work effectively in the United States without major language or social problems.

“When then in the spring of 2000 they came back to Hamburg it was clear to them that basically they would carry out the attack with planes,” said Murck.

“But they were not in Hamburg for long after that. They went to the USA in order to train and prepare. They were hardly here once the plan had been decided upon and given to them.”

The German intelligence services had had some of the men in contact with Atta under surveillance, and had even tapped a number of phone calls made by some of the group’s associates.

But they never had enough to realise what was happening – and although other intelligence services had information which, had it all been fitted together, could have conceivably prevented the attacks, this was not done.

Afterwards, Hamburg authorities would discover two of the crucial helpers, Said Bahaji and Ramzi Binalshibh, had left just days before the attacks. Prosecutors had to content themselves with men on the outer reaches of the group.

“It was difficult afterwards to prosecute those with these tendencies, who were in the milieu around this group,” said Murck.

The federal prosecutors started around 15 investigations of people in the Hamburg grouping, but only two came to trial – Abdelghani Mzoudi and Mounir Motassadeq.

Investigations came to nothing

“The others came to nothing due to a lack of evidence of crimes having been committed,” said Murck. “The fact is, many of these radical Islamists have contact in other cities in this network of Jihadists, but that is not enough to prove a crime.”

Charges of accessory to murder for those killed in the attacks were eventually dismissed in Mzoudi’s case – on the reasoning that if the attack was not planned in Hamburg he could not have been involved.

With Motassadeq, Germany secured the first of only a handful of convictions of people in connection with 9/11. He was found guilty of more than 3,000 counts of accessory to murder and is now half-way through a 15-year prison sentence.

Yet his lawyer Udo Jacob told The Local that the conviction was wrong, based on the assumption that the plans for the 9/11 attack were drawn up in Hamburg, which is a theory no longer generally accepted.

He is trying to persuade the German justice system to re-hear the case, hoping to dig up new evidence which would convince a court to acquit and release his client.

He said the prosecutors’ reasoning was that he must have known what they were planning, as he was friends with them – yet he barely saw them after their trip to Afghanistan when they were recruited to the al-Qaida plot.

A verdict based on assumption?

“It was a verdict based on a theory, an assumption,” said Jacob, who hopes to persuade Mzoudi to return from his home in Morocco to Germany to testify in any new hearing of the Motassadeq case.

“The Motassadeq case is one which does not let me go,” said Jacob. “It was a defeat for us, but also a defeat for German justice. It was a wrong verdict. I hope the justice system takes the chance to reverse it.”

Another Hamburg associate of the Atta group, who also has other connections to al-Qaida, is Mahmoud Darkazanli, a German citizen who rejected several recruitment attempts by German and American intelligence services.

He remains at liberty in Hamburg, said Murck, admitting there was nothing the authorities could pin on him.

“We have in Hamburg, in the years since 2001, extradited around 15 people. That was possible – you need more evidence if you want to prosecute them but you can extradite them,” he said. “This was not possible with Mahmoud Darkazanli for example, as he has German citizenship.”

He admitted the danger of terrorism was still present, but said German authorities were more effective now than a decade ago – internally as well as in terms of cooperation with their foreign counterparts.

Unfortunately, the tool of extradition is pretty much the only one the German authorities have to get rid of people who are considered to be a potential threat, he said.

“We have closed down the al-Quds mosque in Hamburg too, depriving Islamists of their most important meeting place,” Murck said. “But we know there are people here who support the idea of Jihad and who will perhaps join the fight.”