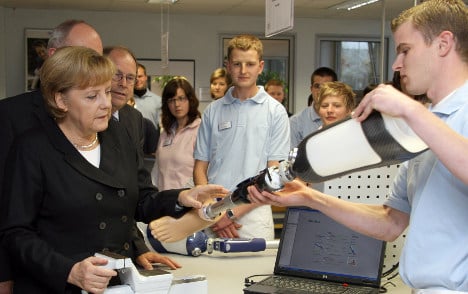 Everyone’s favourite superpower was discovered by chance in 1895 in Wilhelm Conrad Röntgen’s laboratory at the University of Würzburg. The new part of the light spectrum was named simply Röntgen for several decades, a name that has stuck in several languages, including German, to this day.

But in his earliest paper on the subject, Röntgen himself gave his discovery the mysterious, spy-filmesque appellation “X” because he did not know what he had found. Röntgen was not slow to see the medical application of the strange shadows showing up on his photographic plates, and the picture he made of his wife’s hand – complete with wedding ring – is believed to be the first ever X-ray. When she saw the picture, Mrs. Röntgen reportedly exclaimed, “I have seen my death!”

This one might not do much for Germany’s environmental credentials, but the next time you go on holiday, you should thank the Germans that you aren’t wobbling through the lower atmosphere in a crate attached to a wheezing propeller. As with many major inventions, the development of the jet stretches over many decades (even centuries) and countries, but Hans van Ohain has one of the best claims.

The German engineer began his own design for a jet engine in 1935. The idea took off – literally – when he met aircraft industrialist Ernst Heinkel, who immediately saw the potential. A series of prototypes reached their climax with a petrol-fuelled engine attached to a simple plane – the He 178, which had its maiden flight in the northeastern coastal town of Rostock in August 1939.

If you don’t count steam-powered contraptions made in the 18th century France, the origin of the car is as German as sausages, sauerkraut and sandals. It was Nikolaus August Otto who first invented an internal combustion engine that could burn petrol in an internal piston chamber and he did it in 1876 in Cologne. The only catch was he meant it to stay in one place.

It took several other German geniuses to put Otto’s four-stroke marvel on wheels. The most notable of these were Karl Benz in Mannheim (1886) and Gottlieb Daimler and Wilhelm Maybach in Stuttgart (1889). This has also not proven the most environmentally friendly of inventions. Perhaps the recent nuclear power shutdown was a delayed German guilt effect?

It took a long time for the prosthetic leg to develop beyond the Long John Silver solution, but in 1997 the Lower Saxony-based Otto Bock HealthCare company gave the world’s pirate population the first completely microprocessor-controlled knee joint they had ever seen. Since then the computer-controlled leg has facilitated the lives of countless amputees.

The Otto Bock company says the leg needs around two months to adjust to a user’s unique gait, and it can allow different walking speeds. Sensors process information 50 times per second, adapting control to every situation. It also allows amputees to walk downstairs step over step, rather than one step at a time. C-legs have also been developed for amputations above and below the knee.

While the German influence on pop music itself is limited to a few timeless songs about balloons and satellites, the influence on the music market has now become impossible to calculate. That’s thanks to the development in the late 1980s and early 1990s of the music compression technique that became known as MP3.

An MP3 file reduces the data volume of an audio file to one twelfth of its original size (don’t ask us how), so the complete works of Johann Sebastian Bach can now be lost down the back of the sofa along with that pack of gum and your foreign coins. The MP3 was invented by the Fraunhofer research institute, which has become an immense European-wide hive of innovation and application-based inventions.

That’s right, the computer is a German invention. As The Local reported in April last year, the first computer was built in the living room of one Konrad Zuse in 1936. His “Z1” is now acknowledged as the first programme-controlled digital computer. It was the size of a double bed and his wife had a hell of a time cleaning underneath it. Okay, we may have made that last bit up.

Zuse also went on to devise the first ever programming language in the 1940s, and many modern mathematicians regard him as a pioneering genius. Part of the reason you’ve never heard of him is that he failed to find commercial success. Hardly anyone in post-war West Germany recognized the potential of Zuse’s creations, and he failed to get investors to help with the enormous development costs. His company Zuse KG, founded in the state of Hesse, was soon overtaken by giants IBM and Siemens, who bought him out in 1967.

Now that we all spend approximately 60 percent of our lives ruining our eyes staring at them, it’s pleasing to know that liquid crystals were first discovered in cholesterol extracted from carrots. This was done by Austrian chemist Friedrich Richard Reinitzer in 1888, but the father of liquid crystal technology is now universally acknowledged as Otto Lehman from Karlsruhe in western Germany.

The main reason for this is that Lehman apparently had a better microscope than Reinitzer, who actually wrote to the German to get him to check what he thought he had found. Lehman’s microscope was equipped for study crystals at high temperatures, and after years of study, Lehman published his paper “Liquid Crystals” in Leipzig in 1904. Reinitzer went back to studying vegetables.

Fritz Pfleumer (born in Salzburg, but of a German mother) not only created the first audio recording tape, he created the first mix-tape – in Dresden in 1927. In one of the earliest demonstrations of this odd band of very thin paper covered with iron oxide powder, Pfleumer demonstrated that the tape could be cut and re-aligned, so every teenager could finally release his or her inner DJ.

He built the first actual tape recorder a year later, though the hardware was a little unwieldy – you needed 900 metres of tape for one hour of sound. Frankfurt-based electrical corporation AEG bought the rights from Pfleumer in 1932, and quickly developed the first practical tape recorder.

Some German inventions have not quite had the same game-changing effect, however:

Necessity is the mother of invention, they say, but in some cases it’s the mother, father and most of the ancestry. In 1967, 27-year-old Bernd Böttger had had enough of communist East Germany, and decided he was going to escape, via the Baltic Sea. So he invented the Aqua Scooter – essentially a motorized swimming aid that pulls you through the water. An acquaintance betrayed him to the state security forces, however, and Böttger arrived at the beach on his planned escape night to find Stasi officers waiting for him.

After eight months in prison, he built the Aqua Scooter mark two, an upgraded, quieter model, which succeeded in getting him out of the country. His invention was then developed together with the ILO company and became a worldwide trademark. Böttger sadly died in mysterious circumstances while diving in 1972. The Aqua Scooter lives on, though – its two horsepower engine reaches speeds of five miles per hour, and is used by divers and very lazy swimmers everywhere.

Sick of the bother of accidentally buying the wrong size, or having to fiddle around trying to find the right side of that old-fashioned condom? Then simply insert the penis into a special chamber, and allow special nozzles to apply a special fast-drying latex liquid. The process only takes about a minute – only €15 – €25 for the start-up kit. Sounds like a great idea, right?

No, we don’t think so either, and nor did most German consumers, which is why this brilliant 2006 invention by Jan Vinzenz Krause of the Institute for Condom Consultancy never quite rose to the occasion. Market tests found that men were unwilling to insert their penises into the chamber, and were put off by the high-pitched hissing noises that the nozzles made. Strange that.